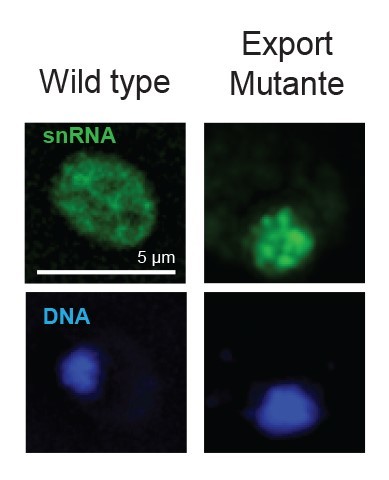 Detection of cytoplasmic snRNA in normal (“Wild type”) cells in the cytoplasm and the "capture" of these snRNAs in genetically modified cells. Photo: Heike Krebber

The cell contains transcripts of the genetic material, which migrate from the cell nucleus to another part of the cell. This movement protects the genetic transcripts from the recruitment of “spliceosomes”. If this protection does not happen, the entire cell is in danger: meaning that cancer and neurodegenerative diseases can develop. Researchers at the University of Göttingen and the University Medicine Centre Göttingen have demonstrated the underlying mechanism in the cell. The results were published in the journal Cell Reports.

Human cells are made up of the following: a cell nucleus, which contains the genetic material in the form of DNA; and the cytoplasm, where proteins are built. In the cell nucleus, the DNA that contains the blueprint for the organism is rewritten into another form, messenger RNA, in order to transport the information so that these instructions can be used for protein production. Separated from the original transcript, the proteins can then be produced in the cytoplasm. The separation is important because the messenger RNA is not immediately usable; rather, a precursor (pre-messenger RNA) has to be produced that still contains areas that have to be removed before the messenger RNA reaches the cytoplasm. If these areas are not removed beforehand, then shortened or dysfunctional proteins are produced, which is dangerous for the cell.

"Our experiments show that in fact the snRNA of the spliceosomes also migrates into the cytoplasm in yeast," said Professor Heike Krebber, Head of the Department of Molecular Genetics at the Institute for Microbiology and Genetics at the University of Göttingen. In a second step, the researchers answered the question as to why the messenger RNA of the spliceosomes actually moves into the cytoplasm. It was unclear because the spliceosomes' task is to cut out individual RNA regions and this takes place back in the cell nucleus. The team of researchers manipulated the yeast by genetic experiments so that the precursors of snRNA no longer changed in the cytoplasm. The observation: "The spliceosomes attempt to work with the precursors, the unfinished snRNA, and this cannot function as it’s supposed to," said Krebber. "This is the reason that healthy cells must first send the precursors of messenger RNA out of the cell nucleus immediately after their production: it is to prevent them from being used by the developing spliceosomes. This basic understanding is important in order to identify the underlying cause of the development of diseases.