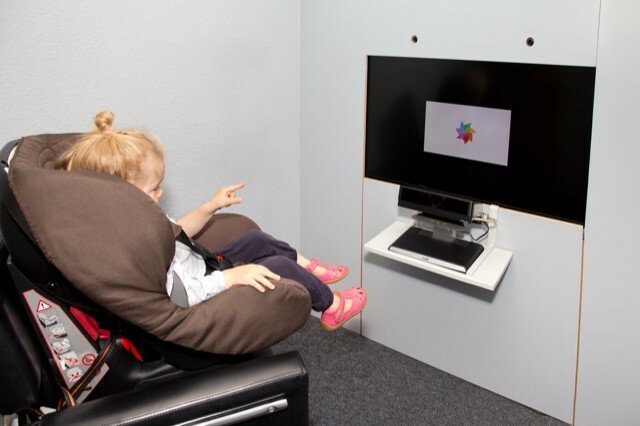 A child listening to a recording as part of the ManyBabies project. The “listening time” is calculated by measuring how long the child stares at a neutral stimulus. Photo: Psychology of Language Research Group, University of Göttingen

A unique study of hundreds of babies across four continents shows that all babies respond more to infant-directed speech – baby talk – than they do to the type of speech directed at an adult. In fact, babies prefer baby talk in any language, but particularly when it’s in a language they’re hearing at home. An international research team including the University of Göttingen – the “ManyBabies” – also revealed that babies as young as six months can pick up on differences in language. The research was published in the journal Advances in Methods and Practices in Psychological Science.

Adults from many cultures instinctively use a form of infant-directed speech with babies which is typically characterised as a more exaggerated way of speaking: a varied pattern of intonation, slower rate of speech with shorter, simpler words and sentences. This global study, involving labs in Canada, the United States, Europe, Australia and Singapore, tested 333 bilingual and 385 monolingual babies. Although 17 separate labs recruited and tested their own participants, the researchers made sure there were certain similarities: first, the bilingual babies shared at least one of their two languages with the monolingual babies; second, testing procedures were constant across all the labs. For the study, babies were separated into groups of six- to nine-month-olds and 12- to 15-month-olds. Each baby was played short, pre-recorded tapes of women speaking English to their own babies using either “baby talk” or adult-oriented speech. The researchers measured each baby’s listening time while those recordings were playing.

The global nature of the study ensured many different language combinations could be studied and not all the babies were from homes in which English was spoken. Nevertheless, all children, regardless of language, preferred infant-directed English as opposed to adult-directed English. Those children who did come from homes where English was spoken paid even more attention to the infant-directed speech in English.

“We have shown that there is a keen interplay between infant-directed speech and the languages that children are exposed to,” says Professor Nivedita Mani from the University of Göttingen. “This drives children to listen longer to infant-directed speech, especially in a familiar language. This is important because children learn better when they attend more to a particular source of input. So this preference for baby talk has the potential to powerfully shape their learning.”