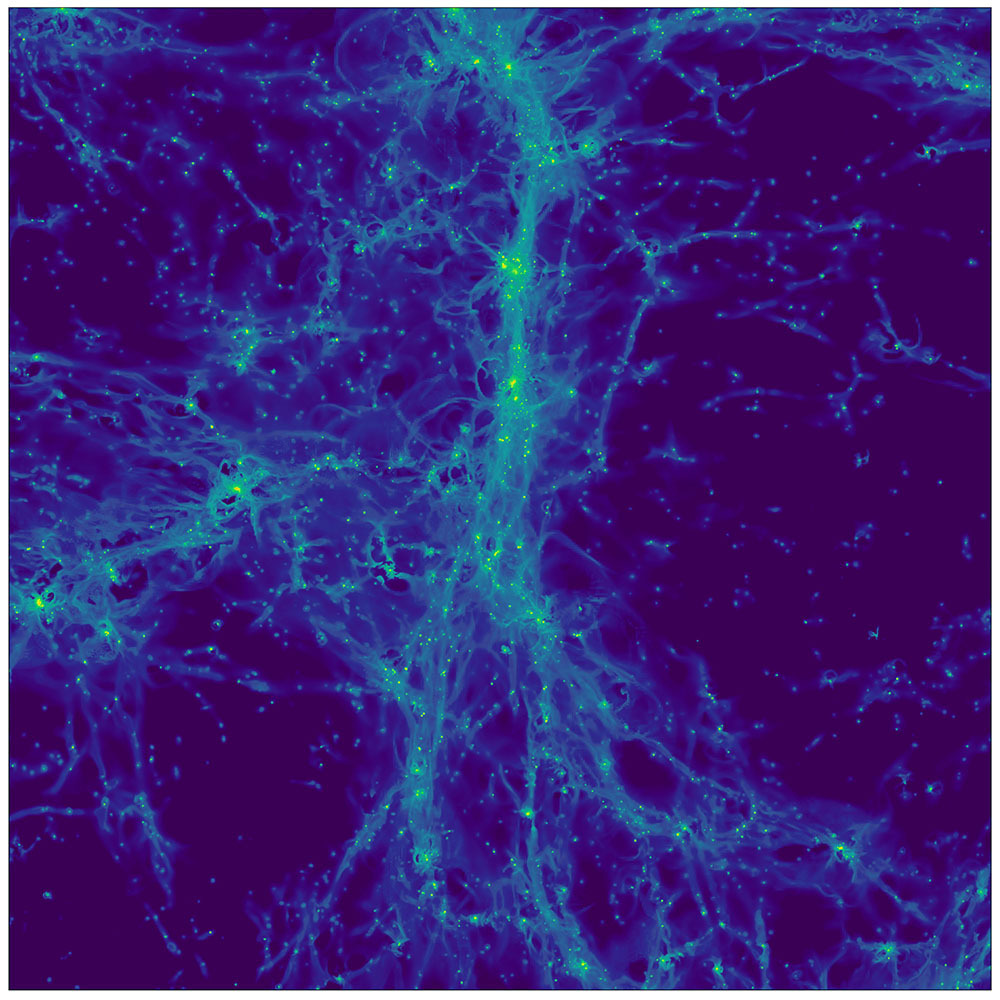 Images of structures in the distant Universe. This image illustrates the distribution of light emitted by the hydrogen atoms of the cosmic web in a region about 15 million light years across. In addition to the very faint emission from the intergalactic gas, we can see several point-like sources that are young galaxies forming their first stars. Photo: Jeremy Blaizot, SPHINX-Projekt

The Universe is criss-crossed by a cosmic web consisting of large filamentary gas structures in which galaxies should form. The existence of this network confirms the most important predictions about how the structure of the Universe changes. An international research team, led by the University of Lyon, have now for the first time produced images of the network of filaments and corresponding maps of the young Universe. The University of Göttingen was involved in the research project. The results of the study have been published in the journal Astronomy and Astrophysics.

An international team led by Professor Roland Bacon (CNRS) has taken, for the first time, detailed images of the filaments of the cosmic web. In order to focus on areas that have been little studied to date, the scientists observed a specific area of the sky, known as the Hubble Ultra Deep Field Region (HUDF), for a total of 140 hours over a period of half a year. The HUDF is the region of the sky that so far has been observed for the longest period of time – many weeks – using the Hubble Space Telescope. The galaxies in the field are 3 to 13 billion light years away from Earth. The team used the 3D MUSE spectrograph on the European Southern Observatory's Very Large Telescope in Chile for their investigations. The result: an impressively large number of galaxies in this relatively small area. "There were 100 times more galaxies than you would usually expect to find in conventional surveys of the sky," says co-author Professor Wolfram Kollatschny from the Institute of Astrophysics at University of Göttingen. "Forty percent of them were so extremely faint that they had not even been detected by the Hubble telescope."

Up to now, it was mainly the nodes of the cosmic web that were investigated, because this is where the quasars – the extremely luminous nuclei of galaxies – are found. However, quasars are located in very dense areas of the cosmic web; the data collected previously from this area could therefore not simply be transferred to the web filaments. The view of the filaments, which have now been discovered for the first time, offers a glimpse into the history of the Universe. The team was able to produce the first maps of the cosmic web in the young Universe – less than two billion years after the Big Bang. "We were surprised to find that the fraction of diffuse light from the filaments that comes from the ultraviolet background radiation is much smaller than expected," says Kollatschny. In fact, the cosmic web is only observable because it is illuminated by stars and quasars. The team suspects that most of the background radiation comes from a huge "sea" of galaxies with very low luminosity. These galaxies are far too faint to be detected individually. "This helps us understand the origin of galaxies: it means that most of the ancestors of our present-day galaxies were little more than tiny clumps of just a few newly formed stars," Kollatschny said. "Direct observation of the cosmic web also confirms the prediction of the large-scale matter distribution and evolution of the Universe, starting from a very homogeneous distribution of primordial gas 400,000 years after the Big Bang. This helps us understand how and where galaxies form and interact with their environment."