Scientists of the Göttingen Cluster of Excellence Multiscale Bioimaging (MBExC) and the Collaborative Research Center SFB1286, University Medical Center Göttingen and Max Planck Institute for Dynamics and Self-Organization uncover a link between protein turnover and synaptic activity. The study was published today in Cell Reports. 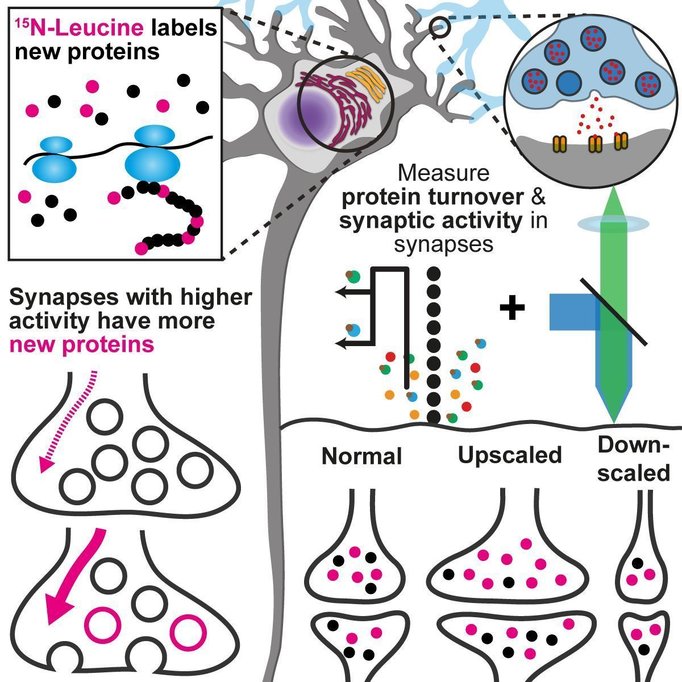 Newly made proteins incorporate a label consisting of the essential amino acid leucine containing the rare nitrogen isotope 15N. This label allows the detection of newly made proteins in individual synapses by imaging mass spectrometry. The activity of the same synapses was determined with fluorescence microscopy. These combined measurements confirmed the model prediction that synaptic boutons have a demand-dependent supply of synaptic vesicles: more active presynapses have more newly made synaptic proteins. This correlation was disrupted by chronic activation or inhibition of synaptic activity. Graphic: Cell Reports / S. Jähne.

Synapses, the communication sites between nerve cells, are key to the function of the neural system and have been extensively studied over the last decades. Especially synaptic vesicles, which store, transport and release messenger substances (neurotransmitters) and are thus crucial to synaptic transmission, have been described in great detail. During information transmission between nerve cells, synaptic vesicles release neurotransmitter by fusing to the membrane (exocytosis), synaptic vesicles are reformed (endocytosis) and eventually recycled for another round of neurotransmitter release. This process is known as the synaptic vesicle cycle. Most of the components involved in this cycle have been elucidated. To date, it is thus known, that these components age and once aged have to be removed in order to prevent damage to the nerve cells. Consequently, synaptic vesicles can undergo the vesicle cycle only a limited amount of times and ageing is happening in an activity dependent way. This means the more active a synapse is, the faster its vesicles age. While the fundamentals of synaptic vesicle and protein ageing have been largely elucidated, very little is known so far about the supply of new vesicles to the synapses, and how this process is regulated. Learning more about this process and the involved synaptic components will help us to further enhance our understanding of synaptic maintenance and function.

To understand how synaptic activity can be maintained despite ageing, Göttingen scientists established a mathematical model of the synaptic vesicle-cycle, and verified their theoretical findings with a combination of fluorescence imaging and secondary ion mass spectrometry. The collaborative effort was led by Prof. Dr. Silvio O. Rizzoli, Director of the Institute of Neuro- and Sensory Physiology of the University Medical Center Göttingen (UMG), and speaker of the Board of the Center for Biostructural Imaging of Neurodegeneration (BIN), and Dr. Viola Priesemann, group leader at the Max Planck Institute for Dynamics and Self-Organization and associated with the Faculty of Physics of the Georg-August-University Göttingen as well as the Bernstein-Center for Computational Neuroscience. Using mathematical modeling of the synaptic vesicle cycle they could show that synapses theoretically require a demand-dependent supply of newly made synaptic vesicles. This compensates for the ageing of synaptic proteins and ensures a robust synaptic transmission. The study reveals that the theoretical requirement is reflected in living nerve cells by a positive correlation between presynaptic protein turnover and synaptic activity on the single synapse level. Disrupting transport to synapses abolishes this relation, suggesting that synaptic protein transport plays a role in demand-dependent vesicle supply. The results of the scientists engaged in the Cluster of Excellence Multiscale Bioimaging (MBExC) and the Göttingen Collaborative Research Centers 1286 (SFB1286) were published today in the renowned scientific journal "Cell Reports".

The scientists verified the findings from their model experimentally using a combination of fluorescence imaging and nanoscale secondary ion mass spectrometry (nanoSIMS). The combination of these two methods enabled the scientists to study protein lifetimes and synaptic activity in individual synapses at once. In comparative measurements of individual synapses, they found their assumption confirmed: more active presynapses also had more newly synthesized proteins. Such a correlation could not be detected in the postsynapse. Disruption of vesicle transport as well as chronic increase or decrease of synaptic activity abolished this correlation. This observation again suggests that the demand-dependent supply of newly formed synaptic proteins is closely linked to synaptic activity.

“The combination of mathematical modelling, fluorescence microscopy, and secondary ion mass spectrometry imaging allowed us to uncover that synapses are supplied with newly-made vesicles in an activity dependent manner”, says Prof. Rizzoli, one of the senior authors of the study. “The mechanisms behind this process are largely unknown, but should be in focus of further studies, especially, since a disruption of this regulation is likely to have severe consequences for the individual cell and thus, for the nervous system.”