In the Sun's middle corona, a team of researchers discovers web-like dynamic plasma structures – and an important clue as to what mechanism drives the solar wind. 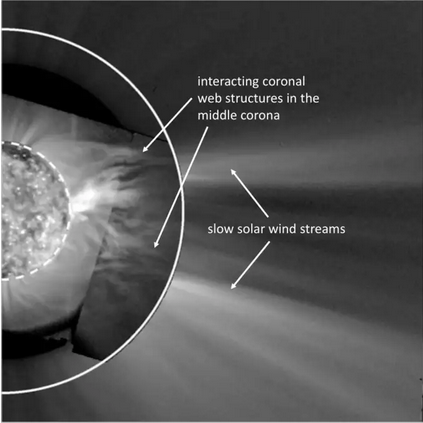 Mosaic of images taken by the GOES instrument SUVI and the SOHO coronagraph LASCO on August 17, 2018. Outside the white marked circle, LASCO's field of view shows the streams of the slow solar wind. These connect seamlessly to the structures of the coronal web network in the mid-corona, which can be seen inside the white-marked circle. Where the long filaments of the coronal web interact, the slow solar wind begins its journey into space. © Nature Astronomy, Chitta et al.; GOES/SUVI; SOHO/LASCO

Using observational data from the U.S. weather satellites GOES, a team of researchers led by the Max Planck Institute for Solar System Research (MPS) in Germany has taken an important step toward unlocking one of the Sun’s most persevering secrets: How does our star launch the particles constituting the solar wind into space? The data provide a unique view of a key region in the solar corona to which researchers have had little access so far. There, the team has for the first time captured a dynamic web-like network of elongated, interwoven plasma structures. Together with data from other space probes and extensive computer simulations, a clear picture emerges: where the elongated coronal web structures interact, magnetic energy is discharged - and particles escape into space. The study was a joint project between scientists at MPS, Southwest Research Institute (SwRI), Predictive Science Inc., and NASA’s Goddard Space Flight Center. The team reports its findings in today's issue of the journal Nature Astronomy.

The Geostationary Operational Environmental Satellites (GOES) of the U.S. National Oceanic and Atmospheric Administration (NOAA) have traditionally concerned themselves with other things than the Sun. Since 1974, the system has been orbiting our planet at an altitude of about 36000 kilometers and continuously providing Earth-related data for example for weather and storm forecasting. Over the years, the original configuration has been expanded to include newer satellites. The three most recent ones currently operating are additionally equipped with instruments that look at the Sun for space weather forecasting. They can image ultraviolet radiation from our star’s corona.

An exploratory observing campaign to image the extended solar corona took place in August and September 2018. For more than a month, GOES’s Solar Ultraviolet Imager (SUVI) not only looked directly at the Sun as it usually does, but also captured images to either side of it. “We had the rare opportunity to use an instrument in an unusual way to observe a region that has not really been explored,” said Dr. Dan Seaton of SwRI, who served as chief scientist for SUVI during the observation campaign. “We didn’t even know if it would work, but we knew if it did, we’d make important discoveries.” By combining the images from the different viewing angles, the instrument's field of view could be significantly enlarged and thus, for the first time, the entire middle corona, a layer of the solar atmosphere from 350 thousand kilometers above the Sun’s visible surface, could be imaged in ultraviolet light.

Other spacecrafts that study the Sun and collect data from the corona, such as NASA's Solar Dynamics Observatory (SDO) as well as NASA’s and ESA's Solar and Heliospheric Observatory (SOHO), look into deeper or higher layers. "In the middle corona, solar research has had something of a blind spot. The GOES data now provides a significant improvement," said Dr. Pradeep Chitta of MPS, lead author of the new study. In the middle corona, researchers suspect processes that drive and modulate the solar wind.

Traveling through space at supersonic speeds
The solar wind is one of our star’s most wide-reaching features. The stream of charged particles that the Sun hurls into space travels all the way to the edge of our Solar System, creating the heliosphere, a bubble of rarefied plasma that marks the Sun's sphere of influence. Depending on its speed, solar wind is divided into fast and slow components. The so-called fast solar wind, which reaches speeds of more than 500 kilometers per second, originates from interiors of coronal holes, regions that appear dark in coronal ultraviolet radiation. The source regions of slow solar wind are less certain though. But even the particles of the slow solar wind race through space at supersonic speeds of 300 to 500 kilometers per second.

This slower component of the solar wind still raises many questions. Hot coronal plasma over one million degrees needs to escape the Sun to form the slow solar wind. What mechanism is at work here? Moreover, the slow solar wind is not homogeneous, but reveals, at least in part, a ray-like structure of clearly distinguishable streamers. Where and how do they originate? These are the questions addressed in the new study.

A look into the middle corona
In the GOES data, a region near the equator can be seen that aroused the researchers’ particular interest: two coronal holes, where the solar wind streams away from the Sun unimpeded, in close proximity to a region with high magnetic field strength. Interactions between systems like these are considered to be possible starting points of the slow solar wind. Above this region, the GOES data show elongated plasma structures in the middle corona pointing radially outward. The team of authors refers to this phenomenon, which has now been directly imaged for the first time, as a coronal web. The web is constantly in motion: its structures interact and regroup.

Researchers have long known the solar plasma of the outer corona to exhibit a similar architecture. For decades, the coronagraph LASCO (Large Angle and Spectrometric Coronagraph) on board the SOHO spacecraft, which celebrated its 25th anniversary last year, has been providing images from this region in visible light. Scientists interpret the jet-like streams in the outer corona as the structure of the slow solar wind that begins its journey into space there. As the new study now impressively shows, this structure already prevails in the middle corona.

Influence of the solar magnetic field
To better understand the phenomenon, the researchers also analyzed data from other space probes: NASA's Solar Dynamics Observatory (SDO) provided a simultaneous view of the Sun's surface; the STEREO-A spacecraft, which has been preceding Earth on its orbit around the Sun since 2006, offered a perspective from the side.

Using modern computational techniques that incorporate remote sensing observations of the Sun, researchers can use supercomputers to build realistic 3D models of the elusive magnetic field in the solar corona. In this study, the team used an advanced magnetohydrodynamic (MHD) model to simulate the magnetic field and plasma state of the corona for this time period. “This helped us connect the fascinating dynamics that we observed in the middle corona to the prevailing theories of solar wind formation,” said Dr. Cooper Downs of Predictive Science Inc., who performed the computer simulations.

There is much to suggest that the researchers are on to a fundamental phenomenon. "During periods of high solar activity, coronal holes often occur near the equator in close proximity to areas of high magnetic field strength," said Chitta. "The coronal network we observed is therefore unlikely to be an isolated case," he adds.

The team hopes to gain further and more detailed insights from future solar missions. Some of them, such as ESA's Proba-3 mission planned for 2024, are equipped with instruments that specifically target the middle corona. The MPS is involved in processing and analyzing the data of this mission. Together with observational data from currently operating probes such as NASA's Parker Solar Probe and ESA's Solar Orbiter, which leave the Earth-Sun-line, this will enable a better understanding of the three-dimensional structure of the coronal web.