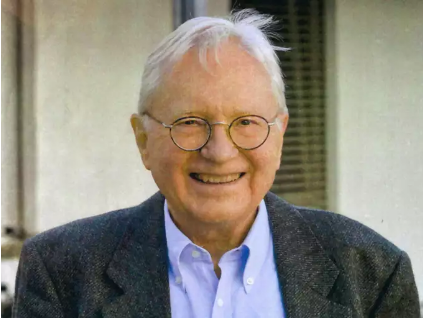 Jan-Peter Toennies, former director of the Max Planck Institute for Flow Research (today: Max Planck Institute for Dynamics and Self-Organization, MPI-DS) and his Italian colleague Giorgio Benedek from the University of Milan have good reason to celebrate. Together, they have been honored for their "pioneering studies of the atomic-scale dynamics at solid surfaces through the development of high-resolution helium-atom scattering spectroscopy". They received the "Premio Enrico Fermi", which is awarded annually by the Italian Physical Society for special merits and discoveries in physics.

A formative role in the institute's history
Jan-Peter Toennies shaped the research and development of the MPI-DS over many decades. As early as 1969, he became director of the institute, which at that time still was called "Max Planck Institute for Flow Research". Together with his colleagues Hans Pauly and Heinz Georg Wagner, he reoriented the research of the institute during the following years. Together, they founded several new physics departments termed Molecular Interactions, Atomic and Molecular Physics, and Reaction Kinetics. These research branches formed a complement to the previous work, which was primarily focused on flow research.

Since his retirement in 1998, Jan-Peter Toennies has remained closely associated with the institute up to this day. In the following years he accompanied a further reorientation of the institute towards nonlinear dynamics. This was also reflected in the renaming of the institute to "MPI for Dynamics and Self-Organization" in 2004, in order to reflect the research of non-linear and complex systems in the name as well.

Untiring commitment to science
During his long scientific career, Jan-Peter Toennies was mainly involved in molecular physics and the scattering of atoms and molecules from the surfaces of solids. His group also developed a new method to perform molecular spectroscopy at previously unattained low temperatures near absolute zero with very high resolution. A significant discovery in this context is the realization that suprafluidity can occur even in very small helium clusters of a few hundred atoms. Until then, suprafluidity was only known from liquid helium. Also, the long-suspected suprafluidity of hydrogen could be demonstrated for the first time using this method.  In the future, this result could be of importance in the application of hydrogen as an energy carrier.

Even after more than 20 years of retirement, Jan-Peter Toennies is still a very active scientific member of the MPI-DS. Only recently, the compendium "Molecules in Suprafluid Helium Nanodroplets", edited and authored together with his former student Alkwin Slenczka, was published. Here, the scientists and international experts describe latest methods of molecular spectroscopy at ultracold temperatures, based on their own research. Currently, Jan-Peter Toennies investigates the forces binding atoms together in order to form molecules.

The awardee himself is very happy about his nomination: "I feel very honored by this decision of the Italian Physical Society and I am happy about the recognition of the close collaboration with the ingenious theorist Giorgio Benedek over almost 50 years" Also Ramin Golestanian, the Managing Director MPI-DS, congratulates: "In the name of the institute I thank Professor Toennies for his tireless commitment and congratulate him warmly on this well-deserved award."

An award in memory of a famous physicist
The Enrico Fermi Award was established in 2001 by the Italian Physical Society. The occasion was the 100th birthday of its namesake, one of the leading physicists of the 20th century. The Italian Enrico Fermi was primarily concerned with nuclear physics; he was awarded the Nobel Prize in Physics in 1938 for his discovery of the chain reaction in atomic nuclei triggered by slow neutrons.

At the beginning of his career in the 1920s, Fermi also conducted part of his research in Göttingen under the supervision of Max Born. It is therefore a very special occasion that now physicist from Göttingen receives the prestigious "Premio Enrico Fermi" award.

The physics prize, endowed with 30,000, will be presented to the two scientists at a ceremony in Milan, Italy, on September 12.