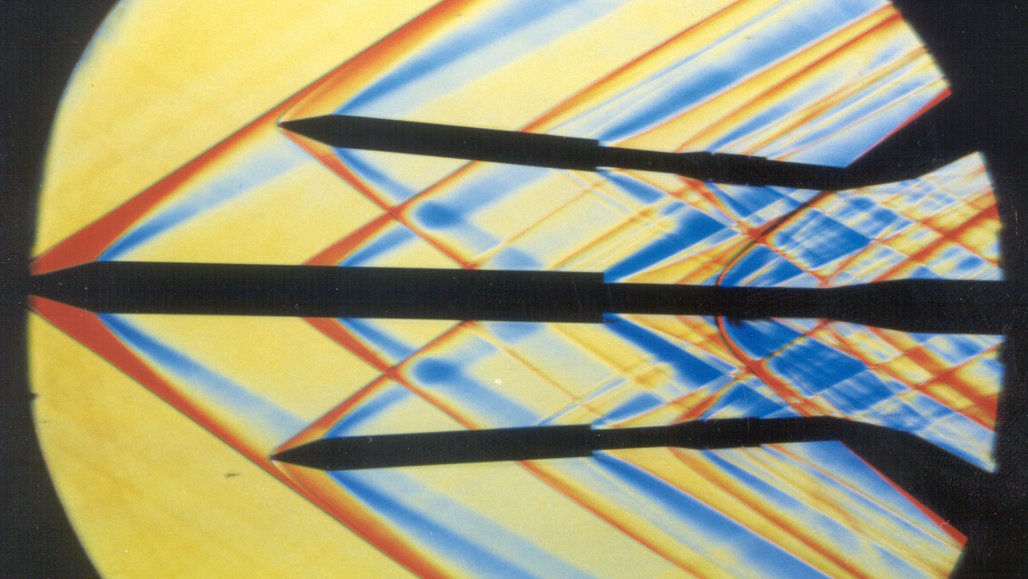 Schlieren image of the separation process for a four-part booster at Mach 1.8 DLR (CC-BY-3.0)

The German Aerospace Center (Deutsches Zentrum für Luft- und Raumfahrt; DLR) and five European companies have teamed up in the RETro Propulsion Assisted Landing Technologies (RETALT) project to jointly advance the research and development of key technologies for European vertical-landing launch vehicles. The consortium will spend three years examining the aerodynamics, aerothermodynamics – that is, in-flight surface temperatures – flight dynamics during both the outward and return flight phases, and navigation and control, as well as structural components, materials and mechanisms.

"Reusable space transport systems equipped with retropropulsion are already being used in the United States. The images and videos from SpaceX were a global sensation. It might therefore be surprising to learn that the physical phenomena underlying the technologies are not yet fully understood, but it is true. As things stand, we are lacking high-quality, experimental data from wind tunnel tests and ground-based demonstrations," says Ali Gülhan, RETALT Project Coordinator and Head of the Supersonic and Hypersonic Technology Department at the DLR Institute of Aerodynamics and Flow Technology in Cologne. "By combining these data with numerical simulations, we will acquire a better understanding of the physics and take a leap towards reusable rockets in Europe. Only close and intense cooperation between the research community and the industrial sector can yield the expertise required for the fastest possible implementation of the necessary technologies," adds Gülhan.

Two concepts for vertical take-off and landing launch vehicles will be examined during the project. The RETALT1 configuration has two stages – similar to the conventional Falcon 9 or Ariane 5 launchers. The first stage of this launch vehicle is equipped with a landing capability. The second launcher (RETALT2 concept) has just one stage. It is designed for smaller payloads and will also use retropropulsion as well as a large aerodynamic surface on its underside to decelerate during its return flight.

The RETALT team is using reference configurations and smaller-scale models to analyse all aspects. Models at scales of between 1:30 and 1:100 are used for the aerodynamic tests in the DLR wind tunnels. Configurations to analyse structural components like the landing legs are produced in scales of up to 1:3. The technologies will be tested in representative environments during the project. Prototypes can then be built on this basis to run tests in space.

About the project
RETALT is a European project that was awarded three million euro in funding by the European Commission within the framework of the EU funding programme Horizon 2020. The partner organisations are DLR, CFS Engineering (Switzerland), Elecnor Deimos (Spain), MT Aerospace (Germany), Almatech (Switzerland) and Amorim Cork Composites (Portugal).

The DLR Institute of Aerodynamics and Flow Technology is responsible for coordinating the project, the design of the reference configurations and assessment of the aerodynamics and aerothermodynamic behaviour by means of wind tunnel testing and computational fluid dynamics (CFD) simulations. The Supersonic and Hypersonic Technology Department at the DLR site in Cologne and the Spacecraft Department team at the site in Göttingen are participating in the project.

CFS Engineering is also conducting CFD simulations and is additionally responsible for the dissemination and exploitation of the project results. Elecnor Deimos is examining the flight dynamics and developing the guidance, navigation and control concept for the reference configurations. MT Aerospace is developing structural components such as the landing legs, as well as aerodynamic control surfaces. They will also produce scaled demonstrators for the structures. Almatech is developing mechanisms for the structural components and is responsible for designing a thrust vector control (TVC) system. Amorim Cork Composites is creating the thermal protection system (TPS) for critical components, especially the base area of the launch vehicles, which will be tested in the wind tunnel using a hot exhaust plume.