The more complex the social group in lemurs, the more signals the animals use to communicate 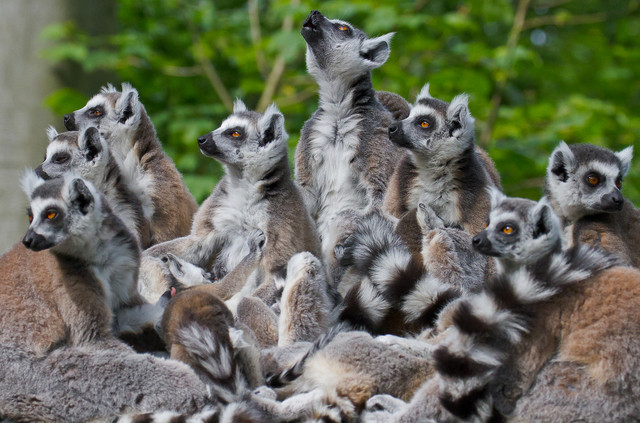 The more complex the social system is in lemurs, the more signals the animals use to communicate. Photo: Chris Schloegl

Living together in groups entails constant interactions between individuals. Individuals need to permanently assess the behavior of others and to respond flexibly to it. Primates and other animals regulate and coordinate their interactions predominantly by vocal, visual, tactile, and olfactory signals. However, it is unclear what social or ecological factors influence the number of signals and the evolution of the various signaling modalities. One hypothesis holds that more complex signals have evolved in pair- or group-living species to regulate their more diverse social interactions. To investigate these relationships, Claudia Fichtel and Peter Kappeler, researchers in the Behavioral Ecology and Sociobiology Unit at the German Primate Center - Leibniz Institute for Primate Research, investigated which factors may explain the diversity of vocal, visual, and olfactory signaling repertoires in different lemur species. They were able to show that lemurs living in larger groups with correspondingly more complex social systems also have more complex communication systems in all three modalities. The size of the signaling repertoire could not be attributed to specific environmental factors, nor was it associated with body size or brain size

To regulate and coordinate interactions animals have to communicate. The lemurs of Madagascar communicate in different modalities and exhibit the major forms of social organization: they live either solitary, in pairs, or in groups. In addition, the activity patterns of the more than 120 known species vary. There are diurnal and nocturnal species, as well as species that are active day and night. "Because lemurs have evolved in isolation from other primates for more than 50 million years, they provide an excellent opportunity to identify fundamental principles in the coevolution of social and communicative traits," explains Peter Kappeler.

The vocal repertoire of lemurs is about as large as that of other monkey species. Lemurs also use vocalizations to signal their dominance status, resolve conflicts, signal their emotional state to others, maintain group cohesion, coordinate group movements, or defend territories. In addition, olfactory communication is prominent in lemurs. They have specialized glands on their genitalia, chest, hands or head, and their secretions are applied to trees, but also to conspecifics. Lemurs also use gestures or facial expressions to regulate social relationships. As, for example, submission in rank disputes is indicated by visual signals in some species but vocal signals in others, it is important to investigate the extent of the signaling repertoire in all modalities to understand whether increasing social complexity has facilitated the evolution of communicative complexity. The study showed that lemurs living in larger groups also evolved more vocal, visual, and olfactory signals. From this, the researchers concluded that communicative abilities have diversified in parallel with increasing social complexity. In addition, Fichtel and Kappeler were able to show that social complexity probably evolved first during evolution, followed by communicative complexity. Variation in other factors, such as habitat characteristics, activity patterns, or the number of lemur species existing in the same habitat, did not explain the evolution of more extensive communicative repertoires. Similarly, there was neither a relationship between vocal and visual repertoire size and brain size, nor between the number of scent glands or scent signals and body size of the lemur species.

"Our study shows that the complexity of vocal, olfactory, and visual communication in lemurs has coevolved with the complexity of the social system, but not with socio-ecological factors, such as the type of habitat or the number of other species in the same range," Claudia Fichtel concludes.