Never before has the space probe been this close to the Sun: In a few days, Solar Orbiter will venture to within 48 million kilometers of our star. 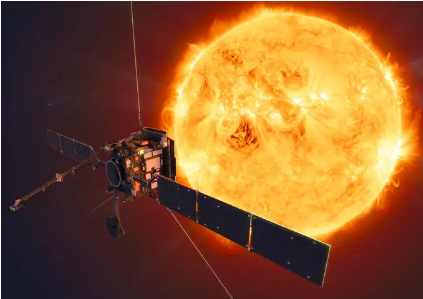 Only 48 million kilometers will lie between Solar Orbiter an the Sun on March 26th. © ESA/ATG medialab

After two years in space, ESA's spacecraft Solar Orbiter, to which NASA is also contributing, is heading for the best vantage point of its flight path so far. Next Saturday, March 26, only about 48 million kilometers will separate the probe from the Sun. That is less than a third of the distance between Earth and Sun. In the days around the so-called perihelion passage, the space probe is expected to record its most valuable data to date; the images of the hot solar corona will have the highest resolution of all times. Solar Orbiter will be able to exploit one of its key advantages: the simultaneous view into different layers of the Sun. The scientists involved hope that among other things this will provide new insights into how the smallest bursts of radiation in the corona arise from the magnetic fields of the visible solar surface. The Max Planck Institute for Solar System Research (MPS) in Germany has contributed to four of the mission’s ten scientific instruments.

"Unlike its predecessors, Solar Orbiter is equipped with unusually comprehensive instrumentation," explains MPS Director Prof. Dr. Sami K. Solanki. The ten scientific instruments not only analyze the electromagnetic fields and solar particles that flow around the spacecraft, but for the first time can look at the Sun itself from a great proximity. For example, the instrument PHI (Polarimetric and Helioseismic Imager), which was developed and built under the lead of the MPS, observes the magnetic fields and flow velocities at the solar surface; EUI (Extreme-Ultraviolet Imager), SPICE (Spectral Imaging of the Coronal Environment) and the coronagraph Metis, to which the MPS contributed, provide information from the hot solar corona.

Radiation bursts and solar wind
There, EUI's telescopes have in recent months been able to detect tiny bursts of radiation known as "campfires". The phenomenon occurs more frequently than previously thought and could help to explain how the puzzlingly high temperatures of about one million degrees in the solar corona are generated. The visible solar surface is much "cooler" at about 6000 degrees. Data taken by PHI and EUI during their commissioning in 2020 and 2021 show that often closely adjacent regions of different magnetic polarity on the solar surface are the origin of this phenomenon. There is much to suggest that structural changes in these spatially confined magnetic fields are instrumental in supplying energy to the "campfires." "According to our evaluations, however, other yet unknown processes must also play a role," says MPS scientist Dr. Fatima Kahil, who analyzed these data. "We very much hope that the better-resolved data from the upcoming perihelion transit will help us better understand these processes," she adds.

During the days around March 26, Solar Orbiter will also look at the Sun's polar regions. So far, the spacecraft has left the orbital plane in which Earth and the other planets orbit the Sun by four degrees; by the end of the mission, that number is expected to rise to more than 30 degrees. This will make it possible to look at the Sun’s poles for the first time.

"Although Solar Orbiter's view of the poles is not yet optimal, the timing is particularly favorable for such observations at the moment," explains MPS scientist Prof. Dr. Hardi Peter, a member of the SPICE, EUI and Metis teams. In its approximately eleven-year cycle, the Sun's activity has not yet reached its maximum. During this comparatively quiet phase, the fast solar wind emerges rather frequently from regions near the poles. With supersonic speeds of about 750 kilometers per second, these solar particles chase through space. Joint measurements by Solar Orbiter’s in situ instruments, which analyze these particles at the spacecraft's location, and instruments looking at the Sun could provide insight into the acceleration mechanism. At the next perihelion transit in about six months, the fast solar wind should have already decreased further. Then, however, spontaneous eruptions of solar particles will occur more frequently.

And yet closer
Solar Orbiter's current, highly elliptical orbit will change little over the next three years: About every six months, the spacecraft will reach its closest point to the Sun. However, with its next perihelion transit, due in October of this year, Solar Orbiter will move yet a little closer to the Sun, to 42 million kilometers. By then, Solar Orbiter will also have surpassed the Helios A and B probes.