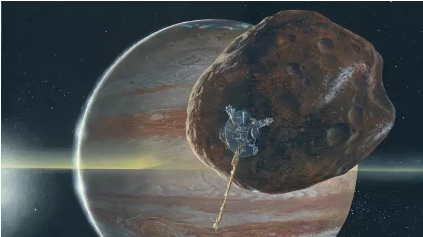 From 1995 to 2003, NASA's Galileo spacecraft explored the Jupiter system. Its final orbits took the probe deep into the giant planet's innermost radiation belts, where it also performed a close flyby of Amalthea. Michael Carroll

Nearly 20 years after the end of NASA's Galileo mission to Jupiter, scientists led by the Max Planck Institute for Solar System Research (MPS) in Germany have unlocked a new secret from the mission's extensive data sets. For the first time, the research team was able to determine beyond doubt that the high-energy ions surrounding the gas giant as part of its inner radiation belt are primarily oxygen and sulfur ions. They are thought to have originated in volcanic eruptions on Jupiter's moon Io. Near the orbit of the moon Amalthea, which orbits Jupiter further inward, the team discovered an unexpectedly high concentration of high-energy oxygen ions that cannot be explained by Io's volcanic activity. A previously unknown ion source must be at work here. The results of the study were published today in the journal Science Advances.

Planets like Earth, Jupiter, and Saturn with global magnetic fields of their own are surrounded by so-called radiation belts: Trapped in the magnetic field, fast moving charged  particles such as electrons, protons, and heavier ions whiz around thus forming the invisible, torus-shaped radiation belts. With their high velocities reaching almost the speed of light, the particles can ionize other molecules when they collide, creating a hazardous environment that can also be dangerous to space probes and their instruments. In this respect, the gas giant Jupiter sports the most extreme radiation belts in the Solar System. In their new publication, researchers from the MPS, the California Institute of Technology (USA), the Johns Hopkins Applied Physics Laboratory (USA), the Laboratory of Instrumentation and Experimental Particle Physics (Portugal), and the Academy of Athens (Greece) now present the most comprehensive study to date of the heavy ions in Jupiter's inner radiation belts.

Like Jupiter's massive magnetic field, its radiation belts extend several million kilometers into space; however, the region within the moon's orbit of Europa, an area with a radius of about 670,000 kilometers around the gas giant, is the scene of the highest energetic particle densities and velocities. Viewed from Jupiter, Europa is the second of the four large Jovian satellites named “Galilean moons” after their 17th century discoverer. Io is the innermost Galilean moon. With the space probes Pioneer 11 in the mid-1970s, Galileo from 1995 to 2003, and currently Juno, three space missions have so far ventured into this innermost part of these radiation belts and performed in-situ measurements. "Unfortunately, the data from Pioneer 11 and Juno do not allow us to conclude beyond doubt what kind of ions the spacecraft encountered there," says MPS scientist Dr. Elias Roussos, lead author of the new study, describing the current state of research. "Therefore, their energies and origin were also unclear until now," he adds. Only the now rediscovered data from the last months of the Galileo mission is detailed enough to improve this situation.

Venturing into the inner radiation belts
NASA's Galileo spacecraft reached the Jupiter system in 1995. Equipped with the Heavy Ion Counter (HIC), contributed by the California Institute of Technology, and the Energetic Particle Detector (EPD), developed and built by Johns Hopkins Applied Physics Laboratory in collaboration with the MPS, the mission spent the following eight years providing fundamental insights into the distribution and dynamics of charged particles around the gas giant. However, to protect the spacecraft, it initially flew solely through the outer, less extreme regions of the radiation belts. Only in 2003, shortly before the end of the mission, when a greater risk was justifiable, Galileo ventured into the innermost region within the orbits of the moons Amalthea and Thebe. Viewed from Jupiter, Amalthea and Thebe are the third and fourth moons of the giant planet. The orbits of Io and Europa lie farther outward.

"Because of the exposure to strong radiation, it was to be expected that the measurement data from HIC and EPD from the inner region of the radiation belt would be heavily corrupted. After all, neither of these two instruments was specifically designed to operate in such a harsh environment”, Roussos describes his expectations when he started working on the current study three years ago. Nevertheless, the researcher wanted to see for himself. As a member of NASA's Cassini mission, he had witnessed Cassini's final, similarly daring orbits at Saturn two years earlier and analyzed the unique data from that final mission phase. "The thought of the long-completed Galileo mission kept coming to my mind," Roussos recalls. To his own surprise, among many unusable data sets there were also some that could be processed and analyzed with much effort.

Enigmatic oxygen ions
With the help of this scientific treasure, the authors of the current study have now been able to determine for the first time the ion composition within the inner radiation belts, as well as the ions’ velocities and spatial distribution. In contrast to the radiation belts of Earth and Saturn, which are dominated by protons, the region within the orbit of Io also contains large amounts of the much heavier oxygen and sulfur ions, with oxygen ions prevailing among the two. "The energy distribution of the heavy ions outside the orbit of Amalthea suggests that they are largely introduced from a more distant region of the radiations belts," Roussos says. The moon Io with its more than 400 active volcanoes, which repeatedly hurl large amounts of sulfur and sulfur dioxide into space, and to a lesser extent, Europa, are likely the main sources.

Further inward, within Amalthea's orbit, the ion composition changes drastically in favor of oxygen. "The concentration and the energy of oxygen ions there is much higher than expected," Roussos says. Actually, the concentration should be decreasing in this region, as the moons Amalthea and Thebe absorb incoming ions; the two small moons’ orbits thus form a kind of natural ion barrier. This behavior is, for example, known from radiation belts of the Saturnian system with its many moons.

The only explanation for the increased concentration of oxygen ions is therefore another, local source in the innermost region of the radiation belts. The release of oxygen following the collisions of sulfur ions with the fine dust particles of Jupiter’s rings constitute one possibility, as the researchers’ computer simulations show. The rings, which are much fainter than the Saturnian ones, extend approximately as far as the orbit of Thebe. However, it is also conceivable that low-frequency electromagnetic waves in the magnetospheric environment of the innermost radiation belts heat oxygen ions to the observed energies.

"Currently, it is not possible to distinguish in favor of either of these possible sources," Roussos says. ?ny of these two candidate mechanisms, nevertheless, have parallels to high energy particle production in stellar or extrasolar environments, further establishing that Jupiter’s radiation belts extend into the astrophysical realm, a fact that the researcher hopes would justify their future exploration with a dedicated space mission.