Collaboration project receives one million euros from the Leibniz Association 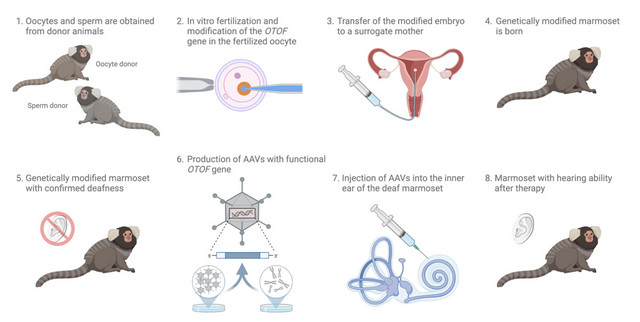 One in 500 children is born with hearing impairment, and in 50 to 70 percent of cases a genetic defect is the cause. In a joint research project, the German Primate Center - Leibniz Institute for Primate Research, the University Medical Center Göttingen and the Max Planck Institute for Experimental Medicine want to establish a gene therapy that can be used to treat hereditary deafness. The method is to be developed on marmoset monkeys and then transferred to human patients. The Leibniz Association has now approved funding of around one million euros for this project.

Otoferlin is a protein found in the hair cells of the inner ear. If the gene containing the blueprint for otoferlin is defective, no functional protein is produced and the affected person is deaf. Hundreds of pathogenic mutations have been described for the underlying gene (OTOF), which are responsible for up to 10 percent of inherited hearing loss. Because genetic restoration of the otoferlin function is possible after the ear has developed, this gene is one of the most promising targets for future gene therapies. On the way to clinical application, a team led by stem cell and developmental biologist Rüdiger Behr of the German Primate Center and neuroscientist and physician Tobias Moser of the University Medical Center Göttingen now wants to apply this approach in marmosets.

In order to develop and preclinically test the gene therapy, the researchers need experimental animals that have been genetically modified to be deaf due to a defect in the OTOF gene. Since these animals are born deaf, they never experience the loss of hearing. These genetic procedures are painless for the animals. In mice, it has already been possible to breed animals born deaf.  Behr and his team now want to transfer the method to an animal species that is as similar as possible to humans in terms of neurophysiology, immunology and genetics, in order to transfer the translation of the approach to humans. "We are using marmosets because their auditory system is very similar to that of humans and their distinctive communication behavior makes them particularly well suited for hearing studies," says Marcus Jeschke, who has been conducting research on marmosets for several years.

The next step is to repair the gene defect created in the marmosets. Adeno-associated viruses (AAVs) are used for this purpose. AAVs serve as gene shuttles; they can be filled with genetic information and then introduce it into body cells without being harmful for the organism. The AAVs, loaded with a functional OTOF gene, are to be injected into the inner ear of deaf marmosets.

"A major challenge here is to find suitable adeno-associated viruses that specifically, efficiently and sustainably express otoferlin in hair cells of the inner ear." says Kathrin Kusch, who specializes in AAVs at the German Primate Center. Tobias Moser's team, among others, has already shown in mice that this method works in principle. However, it is still unclear how long the effect lasts and what concentration of viruses must be used in larger animal models. "We need to answer these questions before the therapy can be applied to human subjects," says Tobias Moser.

"If the method works, it would be a blueprint for other diseases that can be treated using gene therapy. These include defects in the retina or in the heart muscle," says Rüdiger Behr.