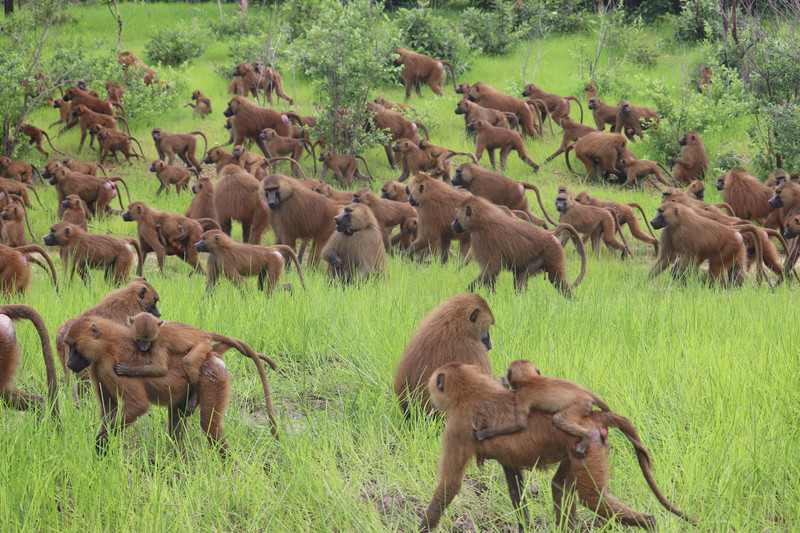 Guinea baboons live in a multi-level society composed of units, parties and gangs. A gang can include up to 200 animals. Photo: Anaïs Avilés de Diego

The sun rises over the Senegalese savannah. The Guinea baboons have spent the night on their sleeping trees and set off together to forage. In order to depart simultaneously as a group and roam together during the day, the animals have to coordinate well. Researchers from the German Primate Center (DPZ) – Leibniz Institute for Primate Research have studied which animals lead the group and how they decide when and in which direction to set off. They observed Guinea baboons (Papio papio) on their forays for two years. The overarching goal was to elucidate which factors favor despotic versus democratic decisions in groups. The authors found that both males and females initiate group departures and that both sexes are similarly successful in doing so. This pattern distinguishes Guinea baboons from hamadryas baboons (Papio hamadryas), in which group movements are initiated and led exclusively by males. Because both baboon species live in a multilevel society but differ in how males and females relate to each other, the latter is critical in determining which individuals influence the coordination of a group: In Guinea baboons, females are more free and less subordinate to males. This is also reflected in the leadership structure.

Guinea baboons are one of six baboon species found in Africa. They differ in appearance and behavior, as well as in their social organization. Chacma, Kinda, olive, and yellow baboons live in uni-level societies. Groups consist of several males, females, and young. There are clear hierarchies between the sexes.

Guinea baboons and also hamadryas baboons, in contrast, live in multilevel social organizations. Hamadryas baboons establish one-male units in which a male lives with several females who mate only with him. Several such units form so-called clans, and several clans form bands. Male-male as well as male-female relationships tend to be characterized by competition and subordination in hamadryas baboons. Guinea baboons also live in small units with one ‘primary’ reproductively active male and up to six associated females and their offspring. Several units form parties and two to three parties form gangs that forage together. Unlike hamadryas baboons, males in Guinea baboons form close friendships with each other and aggression rarely occurs. The females choose their males freely and stay with them for weeks, months, or even years.

“We wanted to find out which individuals in Guinea baboons influence collective decisions like group departures,” says William O'Hearn, a PhD student in the Cognitive Ethology Laboratory at DPZ and co-author of the study. “We already know that in chacma, olive and yellow baboons, males and females lead the groups; in hamadryas baboons, it's exclusively males. So it was interesting to ask what the situation is in Guinea baboons.”

For this purpose, the researchers led by Davide Montanari, a graduate student of the department, observed a group of 131 animals at the DPZ research station Simenti in Senegal over a period of two years. They analyzed 121 group departures and 100 group progressions. They recorded which group members initiated the departures and how the animals were distributed in group progressions, depending on the sex, age and reproductive status of the males.

The researchers were able to make three important observations: First, both sexes initiate group departures. Adult and non-reproductive bachelor males did this more often in about 60 percent of all cases than adult females with about 36 percent. However, both sexes were similarly successful, because in over 80 percent of the cases, the other animals followed the initiators, irrespective of whether the initiator was male or female. Second, the researchers found that both primary, reproductive males and females lead the group. However, both sexes were equally likely to be found in the middle or in the rear of the progression. Bachelor males, on the other hand, were more likely to march in the front of the group. They do not belong to any unit, travel faster, and may thus overtake other group members. A third finding of the study is that members of a unit travel together, as they have closer bonds with each other than with members of other units.

“The results of the study show that although Guinea baboons live in a similar social system as hamadryas baboons, they have a different leadership structure,” explains Julia Fischer, head of the Cognitive Ethology Laboratory at DPZ. “Social organization alone does not determine who leads the group. More important are the inter-sexual relationships among the animals. In Guinea baboons, females have a high degree of social and physical freedom and are less subordinate to males than in hamadryas baboons. This is reflected in their behavior during collective movement decisions.”