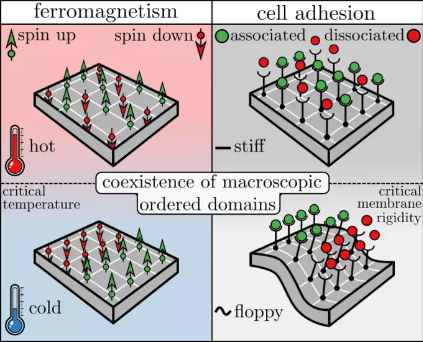 Analogy between ferromagnetism and cell adhesion. Left panel: A set of 16 spins in a ferromagnetic material. At high temperatures entropy dominates rendering the spins randomly oriented up or down throughout the lattice. At low temperatures, more precisely below the Curie temperature, energy dominates giving rise to macroscopic ordered domains with spins pointing in the same direction (up or down). Right panel: A patch of a cell membrane with 16 adhesion bonds. In the case of a stiff membrane entropy dominates rendering the bonds randomly associated or dissociated throughout the lattice. At a lower membrane rigidity, more precisely below the thermodynamic critical membrane rigidity, macroscopic domains with only associated or dissociated bonds, respectively, coexist that form through a process called thermodynamic phase transition © Kristian Blom & Aljaž Godec / Max Planck Institute for Biophysical Chemistry

Cells, the fundamental building blocks of all living organisms, stick to other cells via a process called cell adhesion. For multicellular organisms like ourselves, cell adhesion plays a crucial role in our immune response, in wound healing and cancer development, and it prevents us from degrading into a pool of individual cells. The last twenty years of experiments and theory have shown that cell adhesion may be accurately described by a model originally developed to describe ferromagnetism: the Ising model. Kristian Blom and Aljaž Godec at the Max Planck Institute for Biophysical Chemistry have now exploited this model to understand, through exact calculations, how the avidity of adhesion receptors and the strength of cellular adhesion can be regulated by mechanics. This led to some surprising results. (Physical Review X, September 27, 2021)

From ferromagnetism to cell adhesion
Ferromagnetism is the process through which certain materials spontaneously become magnetic when the temperature is lowered. This phenomenon can be explained by the Ising model, which was originally developed by the German Wilhelm Lenz in 1920. Each atom inside ferromagnetic material carries a magnetic dipole, here called a ’spin’, that can point in one of two directions: up or down. Spins interact with their direct neighbors via a coupling strength J, which favors the spins to align. At high temperatures the interaction has a weak effect (entropy dominates), and therefore on average half of the spins point up and the other half down, resulting in a vanishing net magnetic dipole. On the contrary, at small enough temperatures coupling dominates over entropy, resulting in clusters of spins aligned in the same direction, and thus a nonzero magnetic dipole. The temperature at which such spontaneous magnetization occurs is called the Curie or critical temperature.

Cell adhesion in turn arises through the association of cellular adhesion molecules (CAMs) which are attached to the cell membrane, or the cytoskeleton. CAMs can be either one of two states: associated or dissociated. The wiggling motion of the cell membrane as a result of thermal fluctuations gives rise to an interaction between nearby CAMs – CAMs tend to associate (dissociate) more easily if nearby CAMs are also associated (dissociated). This contributes to the so-called ‘avidity’ – N CAMs may collectively display a much stronger/weaker binding than N separate CAMs in solution.

The coupling decreases with increasing membrane rigidity: CAMs are non-interacting when embedded in very stiff membranes, and strongly interacting in floppier membranes (or cells). The membrane rigidity at which CAMs start to cluster or show ’collective behavior’ is called the ’critical membrane rigidity’, which relates directly to the Curie (or critical) temperature in ferromagnetism.

A new critical point in magnetism: the dynamical critical point
The strength of cell adhesion can be quantified experimentally by measuring the average detachment time of an adherent cell to a stiff substrate. With an atomic force microscope (AFM) an external force can be applied to the adherent cell, thereby driving the cell to the detached state. The stronger the adhesion strength, the longer it takes for a cell to detach from the substrate. It is intuitively expected that increasing the number of CAMs increases the adhesion strength and thus prolongs the detachment time. But what happens upon changing the membrane rigidity?

The dynamical critical point provides a potential explanation for the experimentally observed softening of metastatic cancer cells that leave the initial tumor and spread to secondary locations in the body.  Upon softening, membrane rigidity is speculated to approach the dynamical critical point. Therefore, the average detachment time from the primary tumor decreases, which in turn increases the metastatic potential of the cancer cell. Similarly, the result seems to have important implications for the immune response. Notably, cells can (and in fact do, according to experimental observations) actively tune membrane stiffness.

Interestingly, the fundamental principles underlying cell adhesion may be described by the same physics as magnetism and in turn, the same dynamical critical behavior is also implied for magnetization-reversal times.

In the future, Blom and Godec want to consider an even more detailed theoretical model of cell adhesion, which incorporates so-called catch bonds. This will hopefully lead to a deeper understanding of – and provide news insights into – cell adhesion under force.