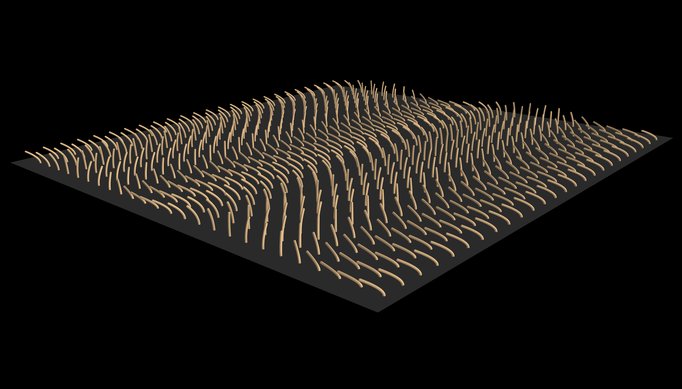 Metachronal waves of cilia comprise large-scale coordinated beating of the actuating filamentous organelle in a manner that allows controlled transport of fluid. Up to now, it has been unknown what determines the direction of propagation and other properties of ciliary waves. © MPIDS / Fleischmann, Novak, Golestanian

A new model describes the coordination of beating cilia allowing to predict their functional behavior. Researchers from the Max Planck Institute for Dynamics and Self-Organization (MPIDS) analyzed the formation of metachronal waves in arrays of cilia and how external cues might influence them. The model allows to better understand the crucial role that cilia play in many biological processes and lays the foundation for its manipulation. This may ultimately improve the corresponding medical diagnostics and treatments, but also helps in the design of artificial systems used in microscale engineering.

Cilia are filamentous, hair-like structures that can be found on nearly all cells of the human body. Depending on the tissue, they fulfill a plethora of essential tasks, such as the transport of mucus in trachea, providing access to nutrients and inducing the left-right asymmetry during embryonic development. In their role as controllers of large-scale fluid transport, motile cilia undergo cyclic beating strokes. By this, they communicate mechanical signals to neighboring cilia and collectively create so-called metachronal waves. Typically, thousands of cilia are involved in the creation of such a wave and thus their movement needs to be well regulated to ensure – and optimize – their biological function. Due to the overwhelming complexity and multi-scale nature of the phenomenon, a mechanistic understanding of the self-organization of cilia into metachronal waves has so far been lacking. “Our model allows an in-depth understanding of the organization of cilia arrays”, explains Professor Ramin Golestanian, principal investigator of the study and Director of the Department of Living Matter Physics at the MPIDS. “For the first time, we are now able to predict the parameters and properties of a forming metachronal wave.”

Cilia behavior depends on both external and internal factors
Creating such models for cilia arrays is essential for understanding how external and internal factors may influence the function of the system. For example, changes in the concentration of certain chemicals or components in the environment induce changes at the small scale and thus might alter the emerging waves and lead to systemic dysfunction. To understand this, we need a multi-scale description of the phenomenon. Since the pioneering works of G.I. Taylor many decades ago (see ‘Further Information’), it is well known that hydrodynamic interactions between cilia can lead to coordination among them. In other words: The cilia coordination be explained due to the emerging flow from a cilium’s stroke affecting the behavior of the entire array, which ultimately causes the metachronal wave. The new model, which has been proposed by Fanlong Meng, Rachel Bennett, Nariya Uchida and Ramin Golestanian, allows to account for the conditions of many independently beating cilia, which coordinate their strokes. In their model, the authors focus on fundamental properties of cilia, such as their different beating harmonics or genomic characteristics. By combining these with features or the emerging waves, they create a powerful theoretical framework describing the cilia arrays.

Hence, the new model is able to explain both, altered properties and make predictions about the collective behavior of a ciliary array. “As this allows a better understanding of the organization on a microscale, the study lays the foundation for a multitude of potential applications” Golestanian adds. They may include the diagnostic assessment of malfunction in biological samples, new approaches for medical treatments manipulation cilia behavior or the engineering of artificial systems using metachronal waves.

2. Geoffrey Ingram Taylor
Analysis of the swimming of microscopic organisms
Proceedings of the Royal Society of London A: Mathematical, Physical and Engineering Sciences, 209 (1951), 447-461
Source
DOI