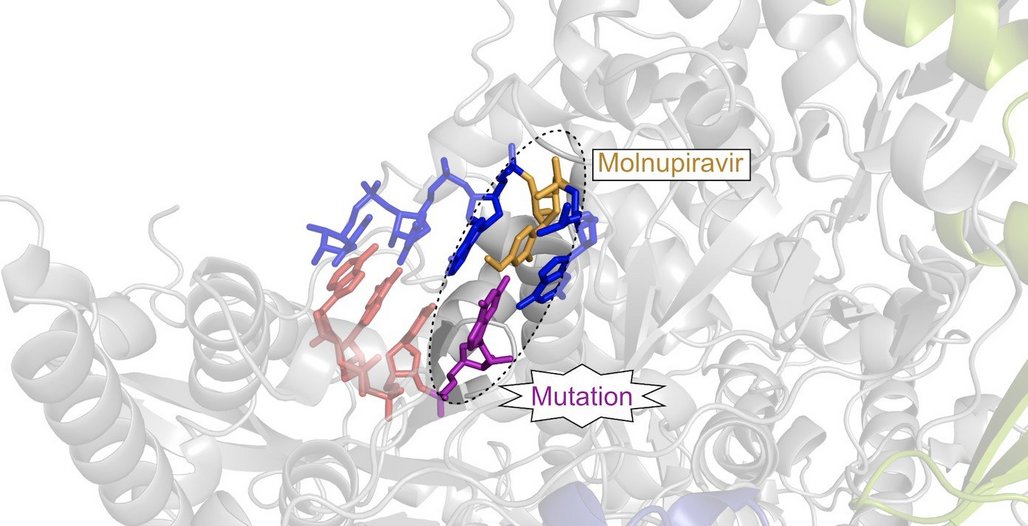 The antiviral drug candidate molnupiravir (yellow) is incorporated into the viral RNA, where it leads to mutations (purple) that ultimately prevent the virus from replicating. Florian Kabinger, Christian Dienemann and Patrick Cramer / Max Planck Institute for Biophysical Chemistry

The United States recently secured 1.7 million doses of a compound that could help to treat Covid-19 patients. In preliminary studies, Molnupiravir reduced the transmission of the SARS-CoV-2 coronavirus. Researchers at the Max Planck Institute (MPI) for Biophysical Chemistry in Göttingen and the Julius Maximilians University (JMU) Würzburg have now elucidated the underlying molecular mechanism. The antiviral agent incorporates RNA-like building blocks into the RNA genome of the virus. If this genetic material is further replicated, defective RNA copies are produced and the pathogen can no longer spread. Molnupiravir is currently being tested in clinical trials. (Nature Structural and Molecular Biology, August 11, 2021)

Since the onset of the corona pandemic, numerous scientific projects set out to investigate measures against the new virus. At full stretch, researchers are developing various vaccines and drugs – with different degrees of success. Last year, the antiviral drug Remdesivir gained attention when it became the first drug against COVID-19 to be approved. Studies, including work by Patrick Cramer at the MPI for Biophysical Chemistry and Claudia Höbartner at JMU Würzburg (Germany), showed why the drug has a rather weak effect on the virus.

Molnupiravir, another antiviral drug candidate, was originally developed to treat influenza. Based on preliminary clinical trials, the compound promises to be highly effective against SARS-CoV-2. “Knowing that a new drug is working is important and good. However, it is equally important to understand how Molnupiravir works at the molecular level in order to gain insights for further antiviral development,” Max Planck Director Cramer explains. “According to our results, Molnupiravir acts in two phases.”

Mutations in the genome stop the virus
Molnupiravir is an orally available drug which becomes activated through metabolization in the body. When it enters the cell, it is converted into RNA-like building blocks. In the first phase, the viral copying machine, called RNA polymerase, incorporates these building blocks into the RNA genome of the virus. However, unlike Remdesivir, which slows down the viral RNA polymerase, Molnupiravir does not directly interfere with the function of the copying machine. Instead, in the second phase, the RNA-like building blocks connect with the building blocks of the viral genetic material. “When the viral RNA then gets replicated to produce new viruses, it contains numerous errors, so-called mutations. As a result, the pathogen can no longer reproduce,” says Florian Kabinger, a doctoral student in Cramer's department. Together with the other first authors, Carina Stiller and Jana Schmitzová, he conducted the crucial experiments for the study.

Molnupiravir also appears to trigger mutations in other RNA viruses, preventing them from spreading further. “The compound could potentially be used to treat a whole spectrum of viral diseases,” tells Höbartner, a professor of chemistry at the University of Würzburg. “Molnupiravir has a lot of potential.” Currently, the promising drug candidate is in phase III studies, where it is being tested on a large number of patients. Whether Molnupiravir is safe to be approved as a drug will probably be announced in the second half of the year. The U.S. government is already optimistic and has recently secured about 1.7 million doses worth more than a billion dollars.