A phenomenon known from quantum systems could now make its way into biology: In a new study published in Physical Review X, researchers from the Max Planck Institute for Dynamics and Self-Organization (MPI-DS) in Göttingen show that the notion of topological protection can also apply to biochemical networks. 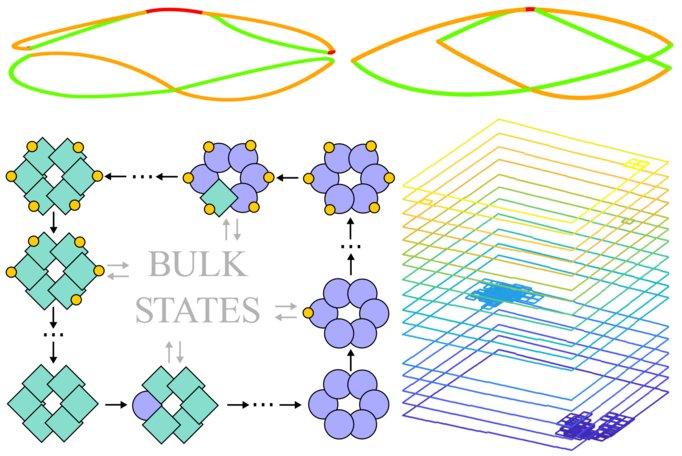 Top: Like an S turning into an O, the spectrum of a biochemical system can undergo a topological transition. Bottom-left: In the topologically-protected state, the biochemical system undergoes edge cycles. In this example, a protein complex made of six subunits which can change shape (green square or purple circle) or bind another molecule (yellow circles) shows edge cycles where all subunits change shape, bind a molecule, all change shape again, and finally release the molecule. Bottom-right: Following the trajectory of the system over time shows that edge cycles are very persistent. © MPIDS / Tang, Agudo-Canalejo, Golestanian

A phenomenon known from quantum systems could now make its way into biology: In a new study published in Physical Review X, researchers from the Max Planck Institute for Dynamics and Self-Organization (MPI-DS) in Göttingen show that the notion of topological protection can also apply to biochemical networks. As these are typically very complex and yet remain very stable against changes, topology can help in the emergence of robust oscillations. The model which the scientists developed makes the topological toolbox, typically used only to describe quantum systems, now also available to biology.

When can we say that a certain property of a system is robust? Intuitively, robustness implies that, even under the effect of external perturbations on the system, no matter how strong or random, said property remains unchanged. In mathematics, properties of an object that are robust against deformations are called topological. For example, the letters s, S, and L can be transformed into each other by stretching or bending their shape. The same holds true for letters o, O, and D. However, it is impossible to turn an S into an O without a discontinuous operation, such as cutting the O apart or sticking the two ends of the S together. Therefore, we say that the letters s, S and L have the same topology – as do the letters o, O and D – whereas the two groups of letters have different topologies. But how does topology relate to biology?

“During the last decades, physicists have discovered that certain properties of quantum systems depend only on the topology of some underlying feature of the system, such as the phase of its wave function or its energy spectrum” explains Evelyn Tang, co-first author of the study. “We wanted to know if this model can also be applied to biochemical systems to better describe and understand processes out of equilibrium.” As topology is insensitive to continuous perturbations – like the stretching or bending of letters in the example above – properties linked to topology are extremely robust. They will remain unchanged unless a qualitative change to the system occurs, such as cutting apart or sticking together the letters above. The scientists Evelyn Tang, Jaime Agudo-Canalejo and Ramin Golestanian now demonstrated that the same concept of topological protection may be found in biochemical systems, which ensures the robustness of the corresponding biochemical processes.

Flowing along the edges
One of the most famous observations regarding topology in quantum systems is the quantum Hall effect: This phenomenon occurs when a two-dimensional conducting material is subjected to a perpendicular magnetic field. In such a setting, the electrons in the material begin to move in tiny circles known as cyclotron orbits, which overall do not lead to any net current in the bulk of the material. However, at the material’s edges, the electrons will bounce off before completing an orbit, and effectively move in the opposite direction, resulting in a net flow of electrons along these edges. Importantly, this edge flow will occur independently of the shape of the edges, and will persist even if the edges are strongly deformed, highlighting the topological and thus robust nature of the effect.

The researchers noticed a parallel between such cyclotron orbits in the quantum Hall effect and an observation in biochemical systems termed “futile cycles”: directed reaction cycles that consume energy but are useless, at least at first sight. For example, a chemical A may get converted to B, which gets converted to C, which subsequently gets converted back to A. This raised the question: is it possible that, like for cyclotron orbits in the quantum Hall effect, futile cycles can cause edge currents resulting in a net flow in a two-dimensional biochemical reaction network?

The authors thus modelled biochemical processes that occur in a two-dimensional space. One simple example are the assembly dynamics of a biopolymer that is composed of two different subunits X and Y: A clockwise futile cycle would then correspond to adding a Y subunit, adding an X subunit, removing a Y subunit, and removing an X subunit, which would bring the system back to the initial state. Now, such a two-dimensional space will also have “edges”, representing constraints in the availability of subunits. As anticipated, the researchers found that counterclockwise currents along these edges would indeed arise spontaneously. Jaime Agudo-Canalejo, co-first author of the study, explains: “In this biochemical context, edge currents correspond to large-scale cyclic oscillations in the system. In the example of a biopolymer, they would result in a cycle in which first all X subunits in the system are added to the polymer, followed by all Y subunits, then first all X and finally all Y subunits are again removed, so the cycle is completed.”

The power of topology
Like in the quantum Hall system, these biochemical edge currents appear robust to changes in the shape of the system’s boundaries or to disorder in the bulk of the system. Thus the researchers aimed to investigate whether topology indeed sits at the heart of this robustness. However, the tools used in quantum systems are not directly applicable to biochemical systems, which underlie classical, stochastic laws. To this end, the researchers devised a mapping between their biochemical system and an exotic class of systems known as non-Hermitian quantum systems. Evelyn Tang, who has a background in topological quantum matter, recalls: “Once this mapping was established, the whole toolbox of topological quantum systems became available to us. We could then show that, indeed, edge currents are robust thanks to topological protection. Moreover, we found that the emergence of edge currents is inextricably linked to the out-of-equilibrium nature of the futile cycles, which are driven by energy consumption.”

A new realm of possibilities
The robustness arising from topological protection, coupled to the versatility inherently present in biochemical networks, results in a multitude of phenomena that can be observed in these systems. Examples include an emergent molecular clock that can reproduce some features of circadian systems, dynamical growth and shrinkage of microtubules (proteins of the cell skeleton) and spontaneous synchronization between two or more systems that are coupled through a shared pool of resources. Ramin Golestanian, co-author of the study and Director of the Department of Living Matter Physics at MPI-DS, is optimistic for the future: “Our study proposes, for the first time, minimal biochemical systems in which topologically-protected edge currents can arise. Given the wealth of biochemical networks that exists in biology, we believe it is only a matter of time until examples are found in which topological protection sensitively control the operations in such systems.”