On Earth, bacteria produce the rare trace gas. Newly evaluated measurement data provide no evidence that it is present in our inhospitable neighboring planet. 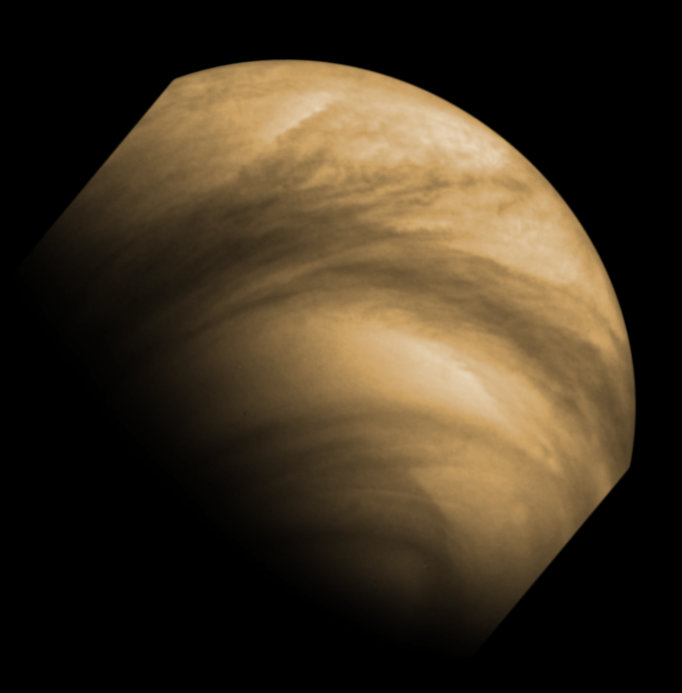 Dense clouds surround Venus at an altitude of about 50 to 70 kilometers. ESA/MPS/DLR/IDA

Measurement data from the James Clerk Maxwell Telescope in Hawaii and the ALMA radio telescope in Chile, published a year ago, contain no evidence of the trace gas phosphine in the clouds of Venus. This is the conclusion of an international team of researchers, including a scientist from the Max Planck Institute for Solar System Research (MPS) in Göttingen, who have now carefully examined the measurement data. Their analysis is a contribution to the scientific discussion about the discovery of phosphine in the atmosphere of Venus, which was reported by researchers in 2020. The toxic trace gas phosphine is known on Earth as a metabolic product of bacteria and could indicate biological processes in the Venus atmosphere. The new analysis of the data as well as a statement from the British colleagues, appears today in the journal Nature Astronomy.

Venus is not a pleasant place: An extreme greenhouse effect ensures average temperatures of about 460 degrees Celsius on its surface. Even if our neighboring planet harbored life forms on its surface in its cooler past, water-based life is likely to have a hard time there today. The dense cloud cover that surrounds the planet at an altitude of 50 to 70 kilometers is a more likely habitat. Temperatures there range from -20 to 65 degrees Celsius. However, the clouds are the scene of violent winds and contain large amounts of sulfuric acid. Researchers have long speculated that highly specialized bacteria may have adapted to these extreme conditions and survive there.

Such considerations were fueled last year by a publication by a group of researchers led by Jane Greaves of Cardiff University. In the current issue of the journal Nature Astronomy it is under discussion. At the time, the scientists had analyzed observational data from the radio telescopes JCMT (James Clerk Maxwell Telescopes) and ALMA (Atacama Large Millimeter/submillimeter Array) and reported finding tiny amounts of the gas phosphine, a compound of one phosphorus and three hydrogen atoms, also known as a monophosphane. Greaves and her co-authors ruled out non-biological origins of the gas, such as lightning or meteorites; instead, bacteria would be a possible source, as on Earth.

The study has sparked widespread scientific debate. For example, researchers from Cornell University recently argued that phosphine could be due to volcanic activity on Venus. However, several research groups have not succeeded in confirming the finding of phosphine - neither by independent measurements, for example with ESA’s space probe Venus Express, nor by re-analysis of the original data. In the meantime, the researchers led by Jane Greaves have corrected their initially found value of 20 parts of phosphine per billion downwards, but adhere to detecting the gas. Now another group of planetary atmospheric experts led by Geronimo Villanueva of NASA's Goddard Space Flight Center has re-examined the original data. They find no evidence of phosphine and their analysis reveals that the rare trace gas could have been mistaken for sulfur dioxide, which occurs in large quantities in Venus' atmosphere.

"Detecting tiny amounts of trace gases in the atmospheres of distant planets without a doubt is decidedly complicated," says Paul Hartogh of the MPS, one of the co-authors of the latest re-analysis. Information about the composition of a planet's atmosphere is encoded in the electromagnetic radiation emitted from it. Each type of molecule that exists there emits radio waves of a characteristic wavelength. Telescopes such as JCMT and ALMA split the total radiation into its individual wavelengths, much like a prism splits visible light into individual colors. The characteristic signals of the molecules thus become visible.

However, the wavelengths of some types of molecules are very close together. This is the case with phosphine and sulfur dioxide. In addition, atmospheric pressure plays a role. The deeper in the atmosphere the molecules are found, the higher the pressure and the more often the molecules collide with others. This leads to the fact that, in addition to radiation of their characteristic wavelength, they also emit radiation of closely neighboring wavelengths. This makes it difficult to distinguish between molecules with very similar signals.

Also, the peculiarities of the particular telescope must also be taken into account. "Between the undistorted signal from Venus' atmosphere and us, there is always the instrument," Hartogh explains. For example, the measurement data from all telescopes contain a certain amount of background noise: The telescope displays statistically fluctuating, low intensities of radiation of any wavelength. The very faint signals of rare trace gases can be almost or completely lost in this background noise. In addition, systematic sources of error in the instrument itself can distort the measurement data.

"For radio astronomy, Venus is a very bright and therefore difficult object," Hartogh explains. As a result, the measured data from our neighboring planet contain much stronger noise than in the ideal case. "This makes it all the more important to use data analysis methods designed to filter out very faint signals with extreme caution," he adds.

The researchers cannot rule out the possibility that tiny amounts of phosphine molecules are floating around in the Venus clouds. But the concentrations would be so small that they could not be detected with JCMT and ALMA.

ESA’s mission JUICE (Jupiter Icy Moon Explorer), which is scheduled to launch next September and will pay a visit to Venus on its way to the Jupiter system, could provide a remedy. As model calculations show, the JUICE instrument SWI (Submillimeter Wave Instrument), developed and built under the lead of the MPS, will be able to detect phosphine concentrations thousands of times lower. The researchers will certainly be watching closely.