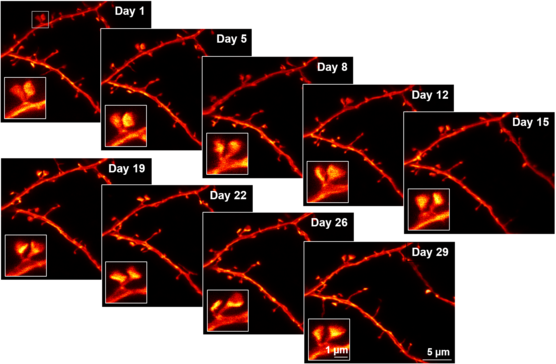 Morphological changes of nerve cell processes are observed in a mouse with super-resolution STED microscopy over one month.

Nerve cells in the brain possess small protrusions, so called dendritic spines, to communicate with other nerve cells by forming a synapse. These contact sites can be both, short- or long-lived thereby existing for even up to an entire lifetime. Short-lived contact sites reflect an ever- adapting brain, which is necessary to process novel experiences. Long-lived, stable contact sites, on the other hand, form the basis of our memory. But even stable memory content can vary to some extent over time. The basis of this process still remains incompletely understood. An international team of scientists at the Max Planck Institute of Experimental Medicine in Göttingen headed by Katrin Willig and at the Ludwig-Maximilians University in Munich  lead by  Sabine Liebscher have now succeeded in detecting and monitoring minute structural changes in the nanometer range of the spines over a month in the brains of mice using superresolution STED microscopy. The work, published in the journal Science Advances, shows that although a subset of synaptic structures remain present at the same location over a period of at least one month, their subunits underwent a remarkable and unexpected change in size and shape. Synaptic structures are thus both stable and dynamic – 'volatile' – at the same time, offering a glimpse into the complexity of synaptic remodelling and computational power mammalian brains are endowed with.

The development of super-resolution light microscopy has a long-standing tradition in Göttingen, culminating in the award of the Nobel Prize in Chemistry to the Göttingen physicist Stefan Hell for his invention of STED microscopy. Katrin Willig's research group now succeeded in applying STED microscopy to perform long-term super-resolution imaging in the brain of living mice over multiple weeks to study central processes of brain function. The smallest, functional units in the brain are synapses, which lie embedded in a surrounding network of millions of nerve cells and supporting cells deep within the tissue and are thus difficult to optically access with light microscopy and in particular with STED microscopy.  The researchers have now succeeded in optimizing the technique such that tiny structures can be observed in the brain of a mouse not only over hours, as was previously the case, but over weeks and up to a month. The implementation of chronic in vivo STED microscopy now enables the assessment  of the dynamics of subcompartments of spines, such as the size of their thin neck and their protruding head. This information is critical as those parameters are at the heart of synapse function and determine its strength.

In collaboration with neuroscientists led by Sabine Liebscher the current work for the first time demonstrates the pronounced structural alterations even so-called stable spines undergo over time. The basis of our memories is thus anything but rigid. Moreover, the two teams have studied synaptic structures in a mouse model of amyotrophic lateral sclerosis (ALS), a degenerative disease of the motor nervous system. Although the mice were not yet affected by the disease processes, the researchers were able to detect pronounced structural abnormalities in the nanostructure of spines, a very early sign of the disease, offering unexpected insight into the neuropathology of ALS.

The now achieved long observation time of 4 weeks at a resolution of less than 100 nanometers opens up numerous unprecedented opportunities for brain research in health and disease. In the future, this technique will also be applied to study learning processes or to gain insight into the interaction of supporting cells and synapses, yet another regulator of synaptic strength.