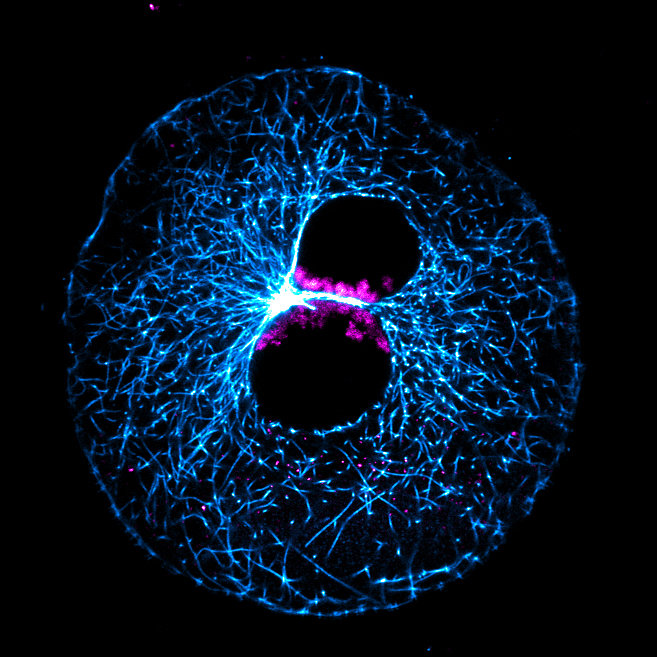 Only one in three fertilizations leads to a successful pregnancy. Many embryos fail to progress beyond early development. Cell biologists at the Max Planck Institute (MPI) for Biophysical Chemistry in Göttingen (Germany), together with researchers at the Institute of Farm Animal Genetics in Mariensee and other international colleagues, have now developed a new model system for studying early embryonic development. With the help of this system, they discovered that errors often occur when the genetic material from each parent combines immediately after fertilization. This is due to a remarkably inefficient process. (Cell, May 7, 2021)

Human somatic cells typically have 46 chromosomes, which together carry the genetic information. These chromosomes are first brought together at fertilization, 23 from the father’s sperm, and 23 from the mother’s egg. After fertilization, the parental chromosomes initially exist in two separate compartments, known as pronuclei. These pronuclei slowly move towards each other until they come into contact. The pronuclear envelopes then dissolve, and the parental chromosomes unite.

The majority of human embryos, however, end up with an incorrect number of chromosomes. These embryos are often not viable, making erroneous genome unification a leading cause of miscarriage and infertility.

“About 10 to 20 percent of embryos that have an incorrect number of chromosomes result from the egg already containing too few or too many chromosomes prior to fertilization. This we already knew,” explains Melina Schuh, director at the MPI for Biophysical Chemistry. “But how does this problem arise in so many more embryos? The time immediately after the sperm and egg unite – the so-called zygote stage – seemed to be an extremely critical phase for the embryo’s development. We wanted to find out why this is the case.”

Insights from a new model system
For their investigations, the scientists analyzed microscopy videos of human zygotes that had been recorded by a laboratory in England. They additionally set out to find a new model organism suitable for studying early embryonic development in detail. “Together with our collaboration partners at the Institute of Farm Animal Genetics, we developed methods for studying live bovine embryos, which closely resemble human embryos,” explains Tommaso Cavazza, a scientist in Schuh’s department. “The timing of the first cell divisions is comparable in human and bovine embryos. Furthermore, the frequency of chromosomes distributing incorrectly is about the same in both systems.” Another advantage of this model system is: The scientists obtained the eggs from which the bovine embryos developed from slaughterhouse waste, so no additional animals had to be sacrificed.

Schuh’s team fertilized the bovine eggs in vitro and then used live-cell microscopy to track how the parental genetic material unites. They found that the parental chromosomes cluster at the interface between the two pronuclei. In some zygotes, however, the researchers noticed that individual chromosomes failed to do so. As a result, these chromosomes were ‘lost’ when the parental genomes united, leaving the resulting nuclei with too few chromosomes. These zygotes soon showed developmental defects.

“The clustering of chromosomes at the pronuclear interface seems to be an extremely important step,” Cavazza explains. “If clustering fails, the zygotes often make errors that are incompatible with healthy embryo development.”

Dependent on an inefficient process
But why do parental chromosomes often fail to cluster correctly? The Max Planck researchers were able to uncover that as well, as Cavazza reports: “Components of the cytoskeleton and the nuclear envelope control chromosome movement within the pronuclei. Intriguingly, these elements also steer the two pronuclei towards each other. So we are dealing with two closely linked processes that are essential, but often go wrong. Thus, whether an embryo will develop healthily or not depends on a remarkably inefficient process.”

The scientists’ findings are also relevant for in vitro fertilization in humans. It has been discussed for some time whether the accumulation of the so-called nucleoli at the pronuclear interface in human zygotes could be used as an indicator for the chance of successful fertilization. Zygotes in which these pronuclear components all cluster at the interface have a better chance of developing successfully, and could therefore be preferentially used for fertility treatment. “Our observation that chromosomes need to cluster at the interface to guarantee healthy embryo development supports this selection criterion,” Schuh says.