Bright, hot and surprisingly frequent – these are just some of the properties of the small campfires that Solar Orbiter has made visible. 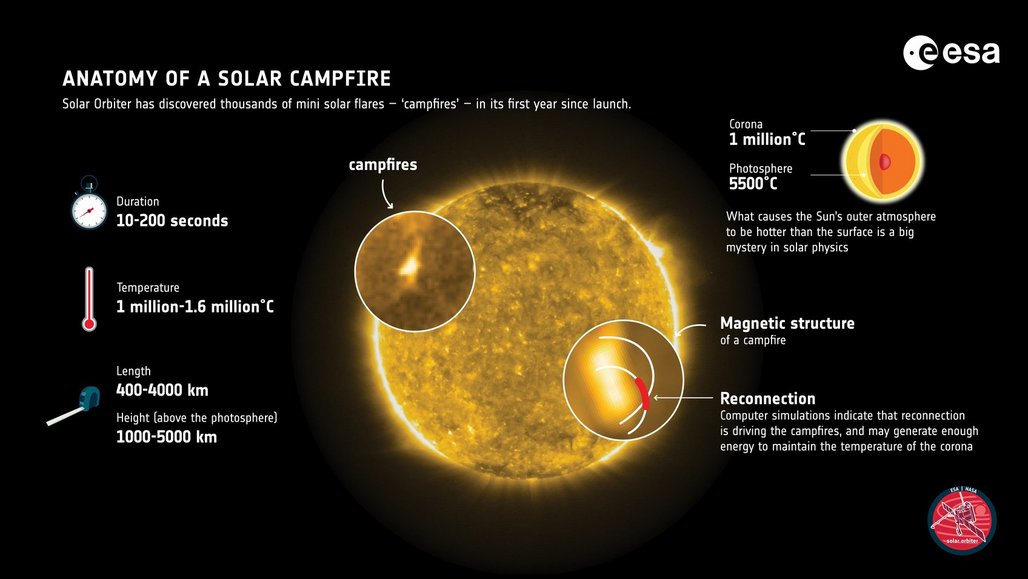 This graphic provides a summary of what ESA’s Solar Orbiter mission, as well as computer modelling, has revealed about solar campfires in the first year of the mission. Campfires are miniature solar flares manifesting as short-lived brightenings in the lower corona, rooted in the magnetic flux concentrations of the chromosphere. They were first identified in Extreme Ultraviolet Imager data, and computer simulations are providing insights into the magnetic field phenomena driving them. Sun image: Solar Orbiter/EUI Team/ESA & NASA; Data: Berghmans et al (2021) and Chen et al (2021)

Among the most exciting discoveries made by ESA's Solar Orbiter spacecraft are small, bright regions in the hot solar corona that had previously eluded other spacecraft. The tiny flares are found in measurement data from the Extreme-Ultraviolet Imager (EUI) taken during the instrument's commissioning in space last year. At the General Assembly of the European Geosciences Union (EGU), the EUI team including researchers from the Max Planck Institute for Solar System Research (MPS) in Germany and another group of researchers led by MPS present the first investigations and simulations of this phenomenon. The smallest flares occur much more frequently than their already known larger cousins. They could be one of the missing pieces of the puzzle needed to explain the almost inconceivably hot temperatures in the solar corona.

Strictly speaking, Solar Orbiter’s instrument EUI is not even in service yet. Regular scientific measurements are not scheduled until the end of this year, when the spacecraft will have reached its targeted, highly elliptical orbit around the Sun. However, even the data obtained during the instrument's technical commissioning last year were eagerly awaited. After all, the 50 images taken by EUI about halfway between Earth and the Sun show the Sun's hot outer atmosphere, known as the corona, in almost unprecedented detail.

EUI sees areas between 400 and 4000 kilometers in size that emit extremely short-waved ultraviolet light of high intensity for a short time. In the images, they appear as tiny, bright spots. "We are already familiar with larger flares of this type from the measurement data of other space probes," says MPS scientist Dr. Udo Schühle, EUI Co-Principal Investigator. "The smallest ones we now see for the first time”, he adds. EUI scientists have come to refer to the bright areas as "campfires".

The team, led by Prof. Dr. David Berghmans of the Royal Observatory of Belgium, has now studied the properties of 1500 such campfires, thus offering the most comprehensive characterization of the phenomenon to date. The corresponding study will be published in the journal Astronomy & Astrophysics. According to the study, the campfires last no more than a few minutes. "They reach temperatures of more than one million degrees; many have an elongated, curved shape," describes MPS scientist Dr. Luca Teriaca of the EUI team.

In addition, for some of the campfires the researchers were able to calculate the altitude in which they occur: in the lower solar corona, about 1000 to 5000 kilometers above the Sun’s visible surface. To do so, the EUI team took into account less highly resolved images from NASA's Solar Dynamics Observatory (SDO) probe, which were taken at the same time and show the campfires from a second perspective.

Puzzling increase in temperature
The region between the lower and upper solar atmospheres has long fascinated solar physicists. There, the temperature rises steeply: from a few thousand degrees to more than a million. It is still unclear which processes supply the necessary energy and convert it into heat. Various wave phenomena, spicules, magnetic processes, and radiation bursts are just some of the suspects.

"As we see now, the smallest, previously undetected flares occur much more frequently than the larger ones," explains EUI team member Dr. Regina Aznar Cuadrado of MPS. "It could be that their influence on coronal heating has been underestimated so far," she adds.

"To evaluate what role the campfires really play, we first need to understand what physical processes are responsible for them," says MPS scientist Prof. Dr. Hardi Peter, one of the authors of a second study, also forthcoming in the journal Astronomy & Astrophysics. In their computer model, the group simulated the interplay of hot plasma and magnetic fields in the region between the solar surface up to the corona, and then calculated how their artificially created solar atmosphere would appear in measurements from EUI. "Quite purposefully, we took the perspective of EUI to relate our calculations to the actual measured data," says first author Yajie Chen, a researcher at Peking University and MPS.

The small bright campfires also appear in the simulated solar atmosphere. The researchers subjected the brightest of them to a thorough examination and looked particularly closely at their surroundings: What processes are taking place there? How do the magnetic properties of the solar atmosphere change?

In most cases, the flares occur when two bundles of almost parallel magnetic field lines, which project into the solar atmosphere in a loop-like fashion, cross and interact. At their intersection, enough energy is released to heat the solar plasma there to more than a million degrees. "The campfires that EUI measures are just the visible tip of the iceberg, so to speak," Peter describes. The trigger is the restructuring of the solar magnetic field underneath.

It is quite conceivable that the corona is home to even smaller flares, which neither EUI nor the computer simulations can currently resolve. How much such tiny campfires contribute to the heating of the corona, however, does not depend solely on their frequency, Peter says. Just as important, he adds, is how much energy they contribute to the corona's overall energy balance. This question the researchers want to explore in their next simulations.