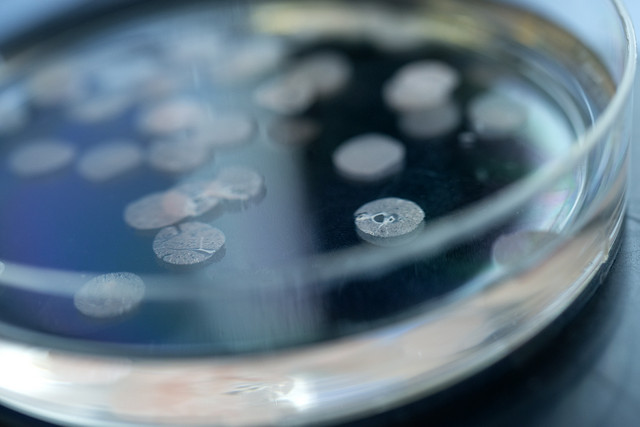 In these human lung tissue sections infected with SARS-CoV-2, known as PCLS, the efficacy of the protease inhibitors nafamostat and camostat was confirmed. Photo: © Fraunhofer ITEM, Ralf Mohr

While the first vaccines against SARS-CoV-2 have now been approved in Europe and other countries, drugs for specific and efficient treatment of COVID-19 have as yet only limited availability – but are urgently needed. Because of the typical long drug development timelines, the approach of iCAIR® researchers is based on drug repurposing – the use of drugs that have already been approved for other therapeutic purposes.

To begin with, researchers from Griffith University’s Institute for Glycomics (IfG), HZI and Fraunhofer ITMP screened substance libraries for suitable drug candidates. The first scientific results have already been accepted for publication: research at IfG led by Michael Jennings began with a biophysical and computational approach to specifically search for compounds that can block the interaction between the SARS-CoV-2 spike protein and its receptor ACE2. Activity of the identified drug candidates was then confirmed in binding and cell infection experiments by iCAIR researchers (https://mbio.asm.org/content/12/2/e03681-20).

Through experimental screening of more than 5000 substances, the project partner Fraunhofer ITMP identified nearly 20 promising compounds that are active against SARS-CoV-2 at low concentrations (below 1 µM) (https://www.nature.com/articles/s41597-021-00848-4). Among these drug candidates are camostat and nafamostat – two protease inhibitors whose efficacy had already been demonstrated in cell culture models. In a study recently accepted for publication, conducted by the group of Stefan Pöhlmann at the German Primate Center (DPZ) in collaboration with iCAIR® researchers, this efficacy has now also been confirmed in human precision-cut lung slices (PCLS) infected with SARS-CoV-2 (https://www.thelancet.com/journals/ebiom/article/PIIS2352-3964(21)00048-7/fulltext). The two compounds camostat and nafamostat, originally used as pancreatic drugs, inhibit the human protease TMPRSS-2, which the virus requires to successfully enter the host cell, with nafamostat showing higher efficacy.

The iCAIR® project partners have already started safety and efficacy tests with nafamostat. They are using different cell and tissue culture models for this – including the PCLS model established at Fraunhofer ITEM. Future efficacy testing will also take into account the new SARS-CoV-2 variants which are currently spreading ever more rapidly. These data already exist and were collected as part of the RENACO project https://pubmed.ncbi.nlm.nih.gov/33794143/. Drug candidates that pass safety and efficacy testing are being further developed for inhaled administration – for example in the Fraunhofer projects RENACO and DRECOR. Inhaled drug delivery was chosen because, firstly, this route of administration allows high local drug concentrations to be achieved in the lungs, the primary target organ of SARS-CoV-2, and secondly, localized drug administration should result in fewer side effects. After completion of a GLP inhalation toxicology study, the way will be open for a first clinical trial phase with inhaled nafamostat. If things go well, it will be possible to take this step still in 2021.

In May 2020, the international consortium iCAIR® started a research project aimed at developing therapeutics against SARS-CoV-2. The Helmholtz Centre for Infection Research (HZI), which joined forces with the consortium's core team last year, is also closely involved in this project as well as a team from Fraunhofer ITMP as a temporary project partner. For further up-to-date information on the partners and projects of the international research consortium iCAIR®, please refer to the website https://www.icair.fraunhofer.de/.