A new study uncovers how forces with unprecedented controllability can be transmitted in electrolyte solutions across large length scales. 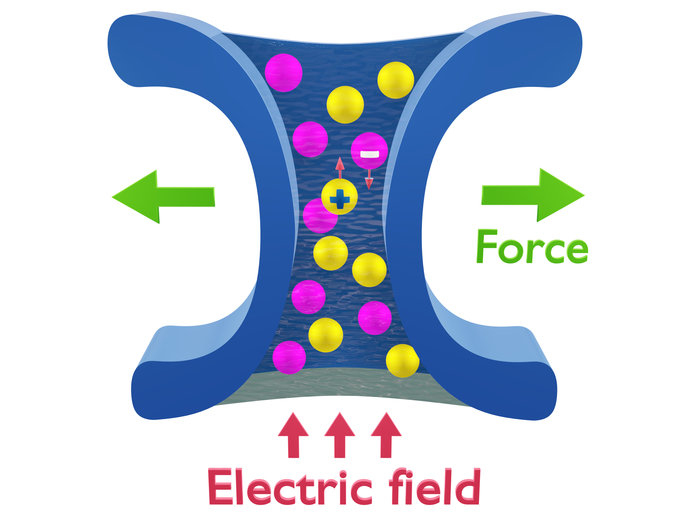 Applying an electric field across an ion channel leads to opposite currents of cations and anions. The correlations between the ion fluctuations in this dynamic state give rise to a non-trivial transverse force on the uncharged boundaries of the channel, even when the channel diameter is much larger than the screening length in the electrolyte. The direction (attraction or repulsion) and the magnitude of this long-ranged force can be tuned by adjusting the applied electric field; therefore, it could potentially be utilised to manipulate cell-membranes or colloidal particles. © MPIDS / Novak, Mahdisoltani & Golestanian

Solutions that conduct electricity, ‘electrolytes’, are ubiquitous not only in batteries and capacitors but also in biofluids including blood plasma; of great practical importance is thus to understand how electrolytes can be utilised to control living cells or other objects that are immersed in them. In a new study published in Physical Review Letters, researchers from the Max Planck Institute for Dynamics and Self-Organization (MPIDS) in Göttingen, and the University of Oxford uncover how forces with unprecedented controllability can be transmitted in electrolyte solutions across large length scales.

Even from long distances, similar charges repel while opposite charges attract each other. This ‘action at a distance’ renders studying electrolytes, which consist of a large number of ions that move in a solvent (usually water), difficult since it implies all of the ions are influencing each other’s motions at every instant of time. However, as the opposite ions are brought close by their mutual attraction, they cancel each other’s effects on farther ions, a phenomenon often referred to as ‘screening’. The screening picture suggests a simple framework for modeling electrolytes, namely the ‘mean-field’ approximation, which assumes the ions residing at large separations cannot exert an effective force on each other. Several recent experimental results have, however, shown strong deviations from such approximate solutions and call for novel theories. In their new study, Saeed Mahdisoltani and Ramin Golestanian shed some light on the configuration of ions within electrolytes when they are set into motion by applying an electric field. In particular, they show that ions far from each other are still correlated, in sharp contrast to the screening picture. “This finding has important implications in terms of the forces exerted on external objects immersed in the driven electrolyte, as has been detailed in this work,” says Ramin Golestanian, the director of the Department of Living Matter Physics at the MPIDS.

Dynamical fluctuations can bypass the screening
The investigations carried out in the early 20th century, including the seminal work of Debye and Hückel, had revealed the screening mechanism in neutral electrolyte solutions when the solution is left to equilibrate. Despite the more elaborate models that have been introduced henceforth, the screening picture has remained largely unchanged and, thus, it has influenced much of the theoretical work performed on electrolytes. Screening also emerges naturally in mean-field theories of the dynamics of electrolytes, such as the well-known ‘Poisson-Nernst-Planck’ equation.

In this new study, scientists have gone beyond the conventional approximate framework by taking into account the effects of the ionic fluctuations in the presence of an applied electric field. “The results of the study reveal for the first time novel dynamically-generated correlations which are scale-invariant and have no screening length,” says Saeed Mahdisoltani, the first author of the paper. Mahdisoltani adds: “This is, in fact, a generic phenomenon purely due to the anisotropy introduced by the electric field: the field deforms the cloud of opposite charges around each ion and gives rise to correlations that can go unscreened.” The mechanism is therefore expected to hold in a wide range of systems with an equal number of mobile charges, including electrolytes with asymmetric charges, and ionic liquids, and therefore it can greatly change how driven charged fluids are viewed and modelled.

Tunable long-range fluctuation-induced forces
“One important consequence of the long-range dynamical correlations is that external objects inserted in the electrolyte far from one another will exert forces on each other, since they influence the fluctuations of the whole solution and not just their immediate surrounding,” explains Golestanian. “This effect is a novel example where fluctuations in a medium can give rise to non-trivial forces, which are usually seen in critical systems and are of great use in colloidal manipulations,” specifies Mahdisoltani, “yet this new force is strikingly tunable, i.e., both its magnitude and directionality (attractive or repulsive) can be changed by adjusting the applied electric field.” As the authors discuss in the article, such control of a generic force at long distances is rare and distinguishes the new effect from many other fluctuation forces. “The exceptional features of this novel force are promising for new design principles in applications ranging from manipulating cell membranes to designing supercapacitors, nanopores, and ion channels,” concludes Golestanian.