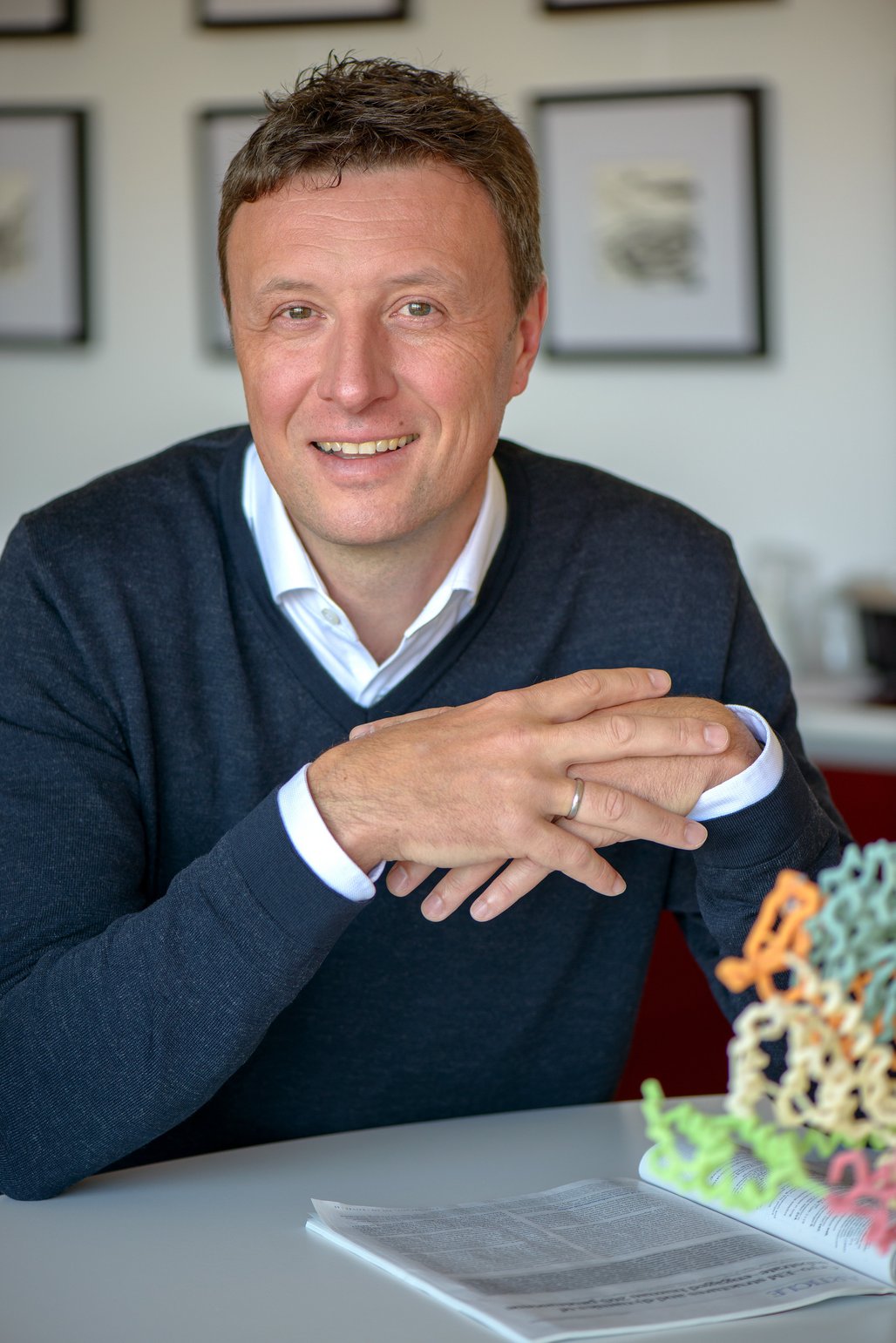 The question is considered one of the great mysteries of biology: How is the activity of genes controlled? The cell only copies active genes in the form of long RNA molecules, which then serve as building instructions for proteins. This copying process – called transcription – is carried out by biological nanomachines known as RNA polymerases. These are the focus of Cramer´s research in the Department of Molecular Biology.

“With his findings, Patrick Cramer was able to not only visualize the key steps of transcription in molecular detail, but also to revolutionize the research field of transcription and gene regulation, thus significantly contributing to the understanding of the cell nucleus,” says GBM president Blanche Schwappach-Pignataro. “We are very pleased to be able to award the Otto Warburg Medal to such an important scientist.”

„I accept this special honor on behalf of all my former and current co-workers, whose research contributions now complement each other to form a more complete picture. But we look further into the future. We are now studying gene activity in a natural context and want to find new active substances against the coronavirus,” the award winner emphasizes.

Cramer and his team have visualized many structures of RNA polymerases in atomic detail for the first time. Most recently, they also resolved the structure of the SARS-CoV-2 polymerase, elucidating how the coronavirus replicates its genetic material. They were able to further clarify why the Covid-19 drug remdesivir has only a weak effect. Cramer’s research thus also contributes to a better understanding of infectious diseases.

About Patrick Cramer
Cramer studied chemistry in Stuttgart, Heidelberg, as well as Bristol and Cambridge (England). After completing his PhD at the European Molecular Biology Laboratory in Grenoble (France), he worked as a postdoctoral researcher with later Nobel laureate Roger Kornberg at Stanford University in California (USA) from 1999 to 2001. He then was appointed as professor of biochemistry at the Ludwig-Maximilians-Universität in Munich, where he headed the Gene Center from 2004 to 2013. Since 2014, he has been director of the Department of Molecular Biology at the MPI for Biophysical Chemistry in Göttingen. Cramer has received many awards, including the Ernst Jung Prize for Medicine, the Gottfried Wilhelm Leibniz Prize, the Louis Jeantet Prize for Medicine, the Hector Science Prize, and the Order of Merit of the Federal Republic of Germany. He is a member of the European Molecular Biology Organization, the National Academy of Sciences Leopoldina, and the U.S. National Academy of Sciences.

About the Otto Warburg Medal
The Otto Warburg Medal is considered the most prestigious German prize in biochemistry and molecular biology and has been awarded annually since 1963. Previous recipients include renowned researchers from the Max Planck Society, among them Nobel laureate Emmanuelle Charpentier and cell biologist Stefan Jentsch. In 2019, Marina Rodnina became the first director at the MPI for Biophysical Chemistry to receive the prestigious award. Since 2012, the journal Biochimica et Biophysica Acta has been the exclusive cooperation partner for the award of the Otto Warburg Medal and sponsors this award. The medal is endowed with a prize money of 25,000 euros.