The BioDiversum will be built in the coming months. It will provide a habitat for endangered animal and plant species. Today, earthworks for the pond began, the biotope’s central measure. With this project on its premises near Nikolausberg, the Max Planck Institute (MPI) for Biophysical Chemistry wants to contribute its share to stopping the massive loss of biodiversity. 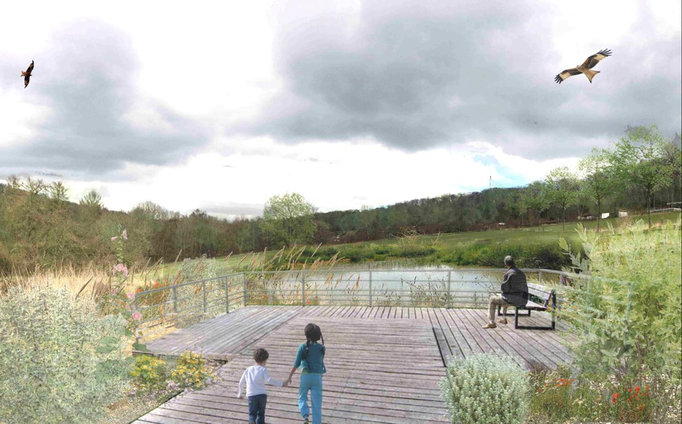 Montage of the pond with observation platform © Wette+Küneke

A spring without birdsong, a summer without humming insects – this ecological horror scenario could become reality if species loss continues at its current pace. In Germany, the bird population has collapsed by 65 percent since 1965, that of insects by 80 percent since 1980. According to the United Nations Diversity Report 2019, around one million species are at the verge of extinction worldwide.

“We want to help counteract this dramatic development,” says Marina Rodnina, Managing Director of the MPI for Biophysical Chemistry. “We therefore establish a biotope that will encompass the entire institute’s grounds.” “Our BioDiversum is designed as a mosaic of different habitats so that it will sustainably improve living conditions especially for birds and insects, but also for other animal groups,” adds BioDiversum coordinator Frederik Köpper. Last year, the institute already transformed previously intensively cultivated grassland into flowering meadows and planted shrubs and other woods.

Today’s start of earthworks on a previously leased pasture at the northeastern end of the institute’s grounds introduces the project’s central measure. “A 900-square-meter pond will be built there, sustainably fed by surface water,” explains Ulrich Küneke of the Göttingen landscape architects Wette+Küneke, who has developed the biotope’s concept together with the institute. To facilitate this, an elaborate system will be installed that collects and purifies the water and then pumps it into the pond, reports Reiner Schymura, head of the institute’s construction management. At the Nikolausberg site, a pond is particularly important in ecological terms as there are few water areas here. Thus, this measure will significantly expand the species range for which the biotope can provide habitat.

The remaining pasture will be converted into a nutrient-poor meadow. Additionally, an orchard and flowering shrubs will be planted. Other measures include multi-row hedges, clearance cairns, and a large compost. In addition, more than 100 nesting boxes will provide breeding sites for a wide variety of bird species. 20 have already been installed in time for the upcoming breeding season. Bat boxes will follow.

“Such a biotope project is unique in the Max Planck Society,” emphasizes emeritus director Herbert Jäckle of the MPI for Biophysical Chemistry and initiator of the BioDiversum. “We hope that other institutes will follow suit and create biotopes in their turn. Also in the Göttingen area there is potential for further renaturation measures. We look forward to exchanging ideas with anyone interested to launch such a project, as well.”

Expert advice by Peter Berthold
The BioDiversum’s concept is based on suggestions by Peter Berthold. The well-known ornithologist and Max Planck emeritus director visited the institute in 2019 to develop initial ideas for the biotope. Representatives of the German environmental NGO BUND and the City of Göttingen also contributed valuable knowledge.

Peter Berthold is a renowned expert in renaturation measures. Going with the slogan A biotope for every community he has been promoting a country-wide network for years: Small and larger biotopes are to be created on areas unattractive for agriculture. His goal is to establish individual biotopes separated by no more than ten kilometers, so that species can spread from one site to the other. He is convinced that, in this way, species diversity can be restored to its 1950 level in just a few decades.

Berthold has already shown that this plan might work: A biotope network at Lake Constance, which he has built together with the Heinz Sielmann Foundation since 2004, exceeded all expectations. Breeding populations of numerous endangered bird species recovered within a few years, and even heavily impaired areas developed back into species-rich habitats.

More than a biotope
The institute’s BioDiversum is furthermore connected with scientific ambition. The development of biodiversity and thus the project’s success should be measurable in the long term so that less effective measures can be adjusted if necessary. To this end, experts from the region monitor the population of plants and representative animal groups at regular intervals. In 2019, they determined the status quo for birds, wild bees, butterflies, grasshoppers, bats, and plants for the first time. The experts furthermore made suggestions that were incorporated into the biotope concept.

The BioDiversum will be freely accessible to the public. Information boards on site and a detailed website will explain the project in all its facets. There will be an educational dimension to the biotope project, as well: It is planned to involve the institute’s kindergarten through activities and thus stimulate the children’s enthusiasm for nature and biodiversity. Cooperation with Göttingen schools shall follow.

The construction measures for the BioDiversum are financed by the Max Planck Society. The Sparkasse Göttingen has generously donated the funds for the nesting boxes. Annual costs for preservation and care will be borne by the institute. (fk/cr)