A comet impact on Jupiter 27 years ago makes it possible for the first time to directly measure the winds in the gas giant's stratosphere. 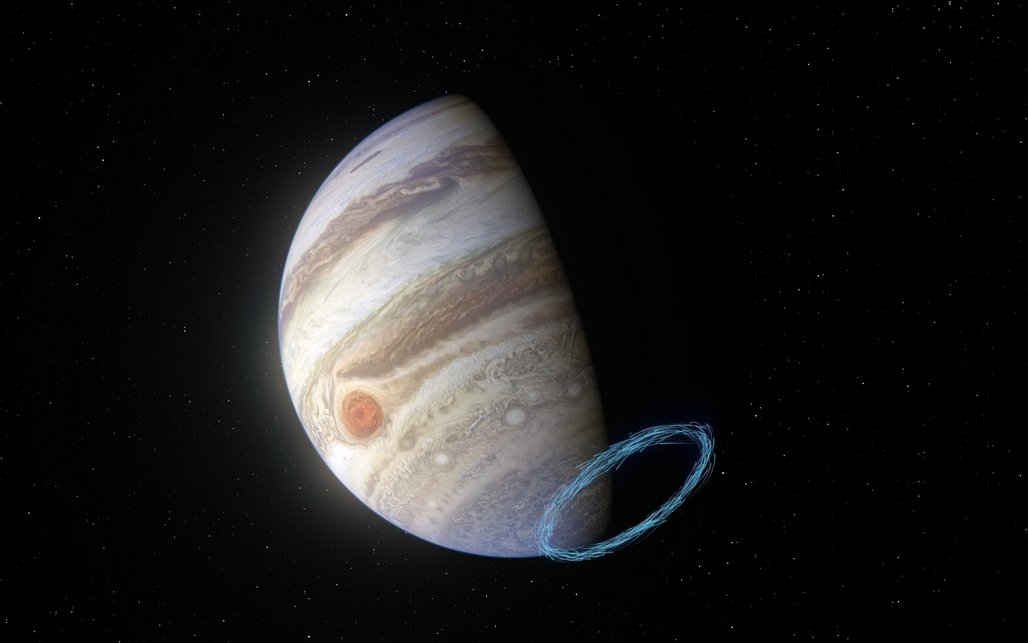 Violent storms rage in the middle atmosphere above Jupiter's poles: With wind speeds of up to 1450 kilometers per hour, they exceed even the strongest terrestrial tornadoes by a factor of three. This is the result of observations performed by an international team of scientists, including three researchers from the Max Planck Institute for Solar System Research (MPS) in Germany. The winds could indicate giant vortices over Jupiter's poles. To measure the air motions in the planet’s middle atmosphere for the first time, the team used a trick: With the help of the ALMA radio interferometer in Chile, the researchers traced the chemical remnants of comet Shoemaker-Levy 9, which collided with Jupiter in 1994. The team reports its findings in the current issue of the journal Astronomy & Astrophysics.

Jupiter is known for its prominent red and white cloud bands. They are an expression of stable East and West winds in the gas giant's lower atmosphere. Strong winds associated with the gas giant's spectacular auroras are present in the upper atmosphere. Only the movements of the colorless gases in the middle atmosphere, the stratosphere, could not be measured directly until now and could only be interpolated in part and with significant uncertainty.

The impact of comet Shoemaker-Levy 9 27 years ago now offers unexpected access to this elusive atmospheric layer. The collision created, among other things, the toxic gas hydrogen cyanide in the planet's stratosphere. "One would expect that so many years after the comet's impact, the hydrogen cyanide would have long since become evenly distributed throughout the stratosphere," explains Dr. Paul Hartogh of the MPS, who was involved in the current study. "Instead, our observations show a very different picture. This suggests stable wind bands in the stratosphere," the scientist adds.

To detect the gas, the team led by the Laboratoire d'Astrophysique de Bordeaux in France used the Atacama Large Millimeter/submillimeter Array (ALMA) radio interferometer, which is jointly operated by the European Southern Observatory (ESO), the National Radio Astronomy Observatory (NRAO) in the United States and the National Astronomical Observatory of Japan (NAJO) in Chile's Atacama Desert. The hydrogen cyanide molecules emit characteristic radiation that is within ALMA's measurement range. The radio telescope is so sensitive and measures so precisely that the researchers were able to determine even the smallest deviations from this wavelength that occur when the gas is in motion relative to the observer. This phenomenon, known as the Doppler effect, also occurs, for example, when an ambulance speeds by: an observer at the side of the road perceives a shift in frequency as the siren passes by.

In this way, the new study shows that the gas flows over the poles at high speeds of up to 1450 kilometers per hour. The distribution of the flow directions could indicate an enormous cyclone raging in the stratosphere above the poles. Its diameter would be four times the size of Earth and about three times the size of Jupiter's famous red spot, a cyclone in the lower atmosphere. "A cyclone of these proportions would be unique in our solar system," Hartogh classifies the newly discovered weather phenomenon.

"It was long known that there are strong winds over Jupiter's poles," Hartogh says. "However, those previously known are located several hundred kilometers above those now measured," he adds. Previous calculations had shown that winds in the upper atmosphere do not continue into the middle atmosphere. "The new ALMA data tell us the contrary," says Dr. Thibault Cavalié of the Laboratoire d'Astrophysique de Bordeaux, lead author of the new study.

The scientists were also able to determine the wind motions in the middle atmosphere above the equatorial region. There, too, stratospheric winds are very strong, with speeds averaging about 600 kilometers per hour.

"The new measurements show us that important and completely novel information about Jupiter can be elicited from radiation with wavelengths in the submillimeter range," Hartogh said. ESA's JUICE mission, which will head to Jupiter next year, will continue to pursue this strategy. It carries on board a small radio telescope called SWI (Submillimeter Wave Instrument), which will also look at Jupiter's middle atmosphere and is being developed and built under the direction of the MPS. SWI will determine at close range the wind systems and dynamics of Jupiter's stratosphere down to the smallest scales and with unprecedented precision.