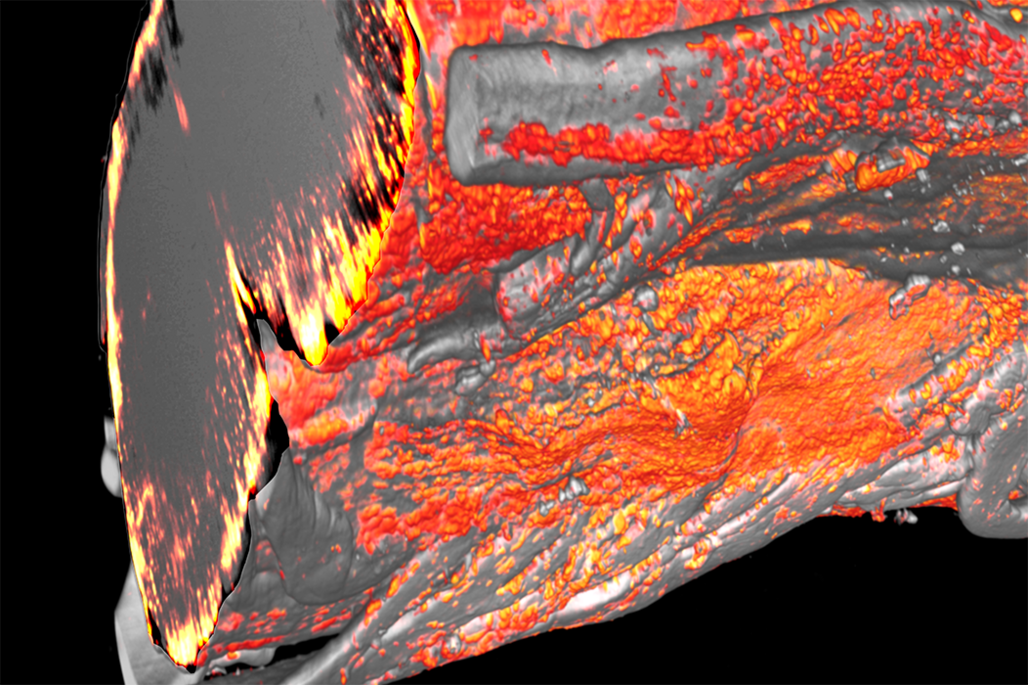 As known from diseases such as arteriosclerosis, cholesterol deposits along blood vessels can be harmful. Similar problems occur in neurological diseases such as multiple sclerosis. Here, defects occur in the regeneration of cholesterol-rich myelin sheaths. The normal recycling of cholesterol from defective myelin sheaths by phagocytes is impaired. This leads to the generation of foam cells that virtually “suffocate” from overfilling with cholesterol. Until now, it was not known what prevents phagocytes from making the cholesterol taken up available again. Scientists at the Max Planck Institute for Experimental Medicine in Göttingen, led by Gesine Saher, have discovered that, paradoxically, the synthesis of cholesterol in phagocytes plays a substantial role in this recycling process. The pharmacological support of cholesterol synthesis improves the regeneration of lesions in the brains of mice. These findings could have implications to treat myelin diseases such as multiple sclerosis.

Like a string of beads, the cholesterol- and lipid-rich myelin sheaths coat and insulate nerve fibres in order to enable fast and efficient impulse transmission. As we all know, a string of beads can break. But this is only a problem if the valuable beads can’t be reused, damage the vacuum cleaner and remain permanently on the floor. Such a situation prevails in chronic brain lesions where the myelin sheaths have been permanently lost. The microglial cells, which are closely related to macrophages, are the scavenger cells of the brain and act like the vacuum cleaner in the scenario above.

Individual myelin sheaths are replaced over a person’s lifetime. In the normal regeneration process, scavenger cells take up cholesterol and other lipids from the defective myelin so that they can be recycled and used to repair the tissue. “This efficient repair mechanism probably takes place all the time in healthy individuals”, explains Gesine Saher.

The promotion of cholesterol synthesis supports cholesterol recycling
Saher and her working group at the Max Planck Institute for Experimental Medicine in Göttingen are investigating the role of cholesterol and other lipids in the nervous system under both physiological and pathological conditions. Together with an international team of researchers from Göttingen, Munich, Freiburg, Hamburg, Amsterdam, and Glasgow, they have investigated how differently the various cell types of the brain deal with cholesterol during the regeneration of the myelin sheaths.

In the study, the researchers genetically knocked out the synthesis of cholesterol in one cell type at a time in the brains of mice and then investigated the effects on the regeneration of myelin sheaths. The mutant animals with defective cholesterol synthesis in the scavenger cells of the brain behaved particularly unexpectedly. They could still absorb cholesterol from degenerated myelin normally but could not recycle it. Many of the microglial cells transformed into foam cells and eventually died from the excess cholesterol taken up. The regeneration of myelin sheaths was strongly reduced. “We wanted to find out why phagocytes stop making the absorbed cholesterol available again”, explains Stefan Berghoff, Saher’s colleague and first author of the study.

An intermediate product of cholesterol synthesis – desmosterol – was particularly important for the switch from degenerative to regenerative processes during the degradation and reconstruction of the myelin membranes. “As a signalling molecule, this precursor molecule not only caused the mobilization of cholesterol for the formation of new myelin sheaths but also helped establishing a pro-regenerative environment”, explains Berghoff.

The endogenous recycling of the myelin sheaths was promoted by the pharmacological support of cholesterol synthesis using an early intermediate of cholesterol synthesis: squalene. “Our results in mice revealed the terpene squalene as a new potential factor in the therapy of myelin diseases such as Multiple Sclerosis”, says Berghoff. “Our results suggest that this treatment has a similar positive effect in humans as in mice”, adds Saher.