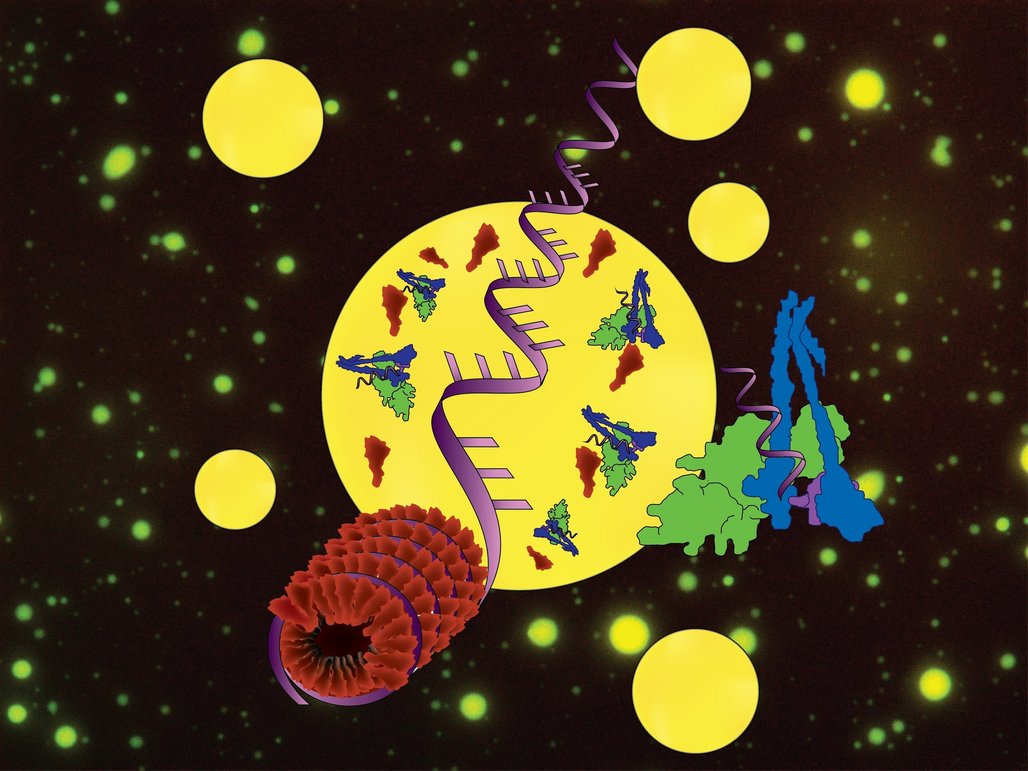 The coronavirus SARS-CoV-2 forms tiny droplets to multiply effectively inside infected cells. Researchers at the German Center for Neurodegenerative Diseases (DZNE) and the Max Planck Institute (MPI) for Biophysical Chemistry have discovered this phenomenon. It may offer starting points for drug development.

The coronavirus carries its genome – in the shape of the so-called RNA – in its interior; however the viral genome is not ‘naked’, but enclosed by the ‘nucleocapsid protein’. Scientists at the Göttingen site of the DZNE and the MPI for Biophysical Chemistry have now shown that this protein and the RNA can jointly condense into tiny droplets when the virus releases its insides into a host cell. This physical phenomenon is called ‘liquid-liquid phase separation’, because the viral droplets float inside another liquid: the fluid medium inside the cell. “The situation is similar to a vinaigrette, where tiny fat droplets and other ingredients float inside an aqueous solution,” says Markus Zweckstetter, research group leader at the DZNE and the MPI for Biophysical Chemistry.

Tiny copying machines
However, this droplet formation is not a specialty of the coronavirus, the biophysicist explains: “Such dynamic compartments composed of proteins and other molecules occur naturally inside cells. They are used as storage sites and reaction chambers. Our study shows that the coronavirus also exploits these possibilities. This is suspected to happen with other pathogens as well.”

The scientists investigated the microscopic events using so-called NMR spectroscopy and other methods that allow to examine the structure and dynamics of molecules. “For the virus, these droplets represent tiny copying machines. In them, various molecular substances that are required for the virus’ replication machinery are concentrated in a very small space,” Zweckstetter says. In addition to an enzyme called ‘RNA-dependent RNA polymerase’, this involves so-called helper proteins. “As a result, molecular transcripts of the viral genome are generated in these droplets. Fatally, the host cell uses these transcripts to produce copies of the virus.”

Starting point for drugs?
Zweckstetter’s team also discovered that the enzyme ‘SRPK1 kinase’, which occurs naturally in the human body, chemically modifies the nucleocapsid protein thereby influencing the formation of the viral droplets. “There is a compound that slows down this enzyme. Laboratory studies by another research group have shown that this so-called inhibitor significantly reduces the infectivity of the coronavirus. Possibly, this happens by acting on the droplet formation. This could provide a starting point for drug development.”