The longest-serving solar observatory in space has turned 25 and is still making significant contributions to solar research. Its old age has become an important merit. 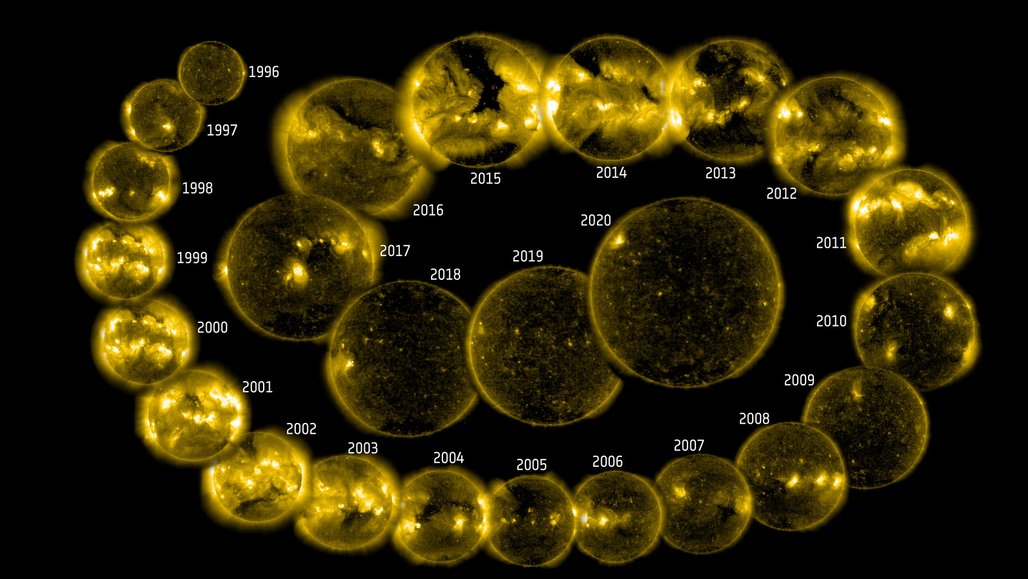 SOHO is the inly space based solar observatory that has been studying the Sun for 25 years. © SOHO (ESA & NASA)

25 years ago, the space probe SOHO (Solar and Heliospheric Observatory), a joint project of ESA and NASA, was launched. Since then, it has been orbiting around our star synchronously with Earth and, thanks to its uniquely unobstructed and multifold view, has shaped our current understanding of the Sun. Despite the increasing competition from more modern space observatories and despite a few technical aches and pains, SOHO's continuous data stream remains invaluable. Actually, the probe’s old age has become an important asset: SOHO is the only solar observatory in space that has accompanied our star through more than two sunspot cycles. Many central questions of solar research can only be answered by such long observation series.

"Over the past 25 years, SOHO has revolutionized our ideas about the Sun and thus about the entire solar system," says Prof. Dr. Sami K. Solanki, head of the department "Sun and Heliosphere" at the Max Planck Institute for Solar System Research (MPS) in Germany. While earlier solar probes typically specialized in one aspect of solar research, SOHO with its twelve scientific instruments was able to image the Sun in its entirety for the first time: from the processes deep in its interior to the solar wind it hurls into space. Equally important is SOHO’s location in space: from its earth-synchronous orbit at a distance of 1.5 million kilometers from our planet, the observatory has an uninterrupted and unobstructed view of the Sun – unlike ground based telescopes or satellites orbiting Earth.

"Suddenly, observational data from the Sun was constantly available, completely independent of the weather and other disturbing influences and of always the same high quality," recalls Dr. Jesper Schou from MPS, who has been a member of SOHO’s MDI (Michelson Doppler Imager) team since the early days. MDI, which is led by Stanford University in the USA, images oscillations and magnetic fields on the solar surface. "In all areas of solar research, SOHO opened up completely new possibilities," he adds. Great parts of today’s textbook knowledge about the inner structure and dynamics of the Sun, the processes in its atmosphere and the origin of the solar wind can be traced back to SOHO.

Some functional, some retired

Crucial to SOHO's success were the twelve scientific instruments onboard to three of which MPS researchers and engineers contributed. One of them, the mass spectrometer CELIAS (Charge, Element, and Isotope Analysis System), is still operating. It studies the solar wind particles that reach SOHO’s observation position. In this way, CELIAS for the first time was able to detect fast uncharged particles in the solar wind and continues to provide valuable insights into the structure of the heliosphere. "Data from CELIAS are still the basis for current scientific publications. The instrument has hardly lost any of its importance over the past 25 years", says MPS researcher Dr. Martin Hilchenbach, a member of the CELIAS team.

Other instruments are no longer fully functional, such as LASCO (Large Angle and Spectrometric Coronagraph), which is led by the American Naval Research Laboratory. Of the three coronagraphs that constitute LASCO, only two still record images of the solar atmosphere. "These two coronagraphs still reliably provide data and have even become more important in recent years," says Dr. Bernd Inhester of MPS. Since 2014, LASCO has been supporting NASA's STEREO mission, which has been unable to provide a three-dimensional view of the solar corona on its own since the failure of one of its two twin probes.

Other SOHO instruments, such as the spectrograph SUMER (Solar Ultraviolet Measurements of Emitted Radiation), have been deliberately retired. The instrument, which was developed and built under the leadership of MPS, was increasingly showing symptoms of old age; it was turned off in 2017. MDI, too, is taking things easy. It has been replaced by a more recent instrument onboard NASA’s Solar Dynamics Observatory (SDO), but MDI can start taking science data again should SDO fail.

A treasure trove of data

But even the data from the decommissioned instruments still provide valuable services to science. "The Sun is a variable star that is constantly changing on the most diverse time scales - from minutes to millenia," Solanki explains. "Anyone who wants to understand the Sun must therefore observe it for as long as possible," he adds.

"The Sun's magnetic field is generated and maintained by motions in the solar interior. MDI observations of solar oscillations have been key to see these motions below the Sun's surface using the technique of helioseismology" explains Prof. Dr. Laurent Gizon, who leads the department "Solar and Stellar Interiors" at MPS. In the late 1990s, MDI revealed how rotation varies with with radius and latitude in the solar interior, an essential part of the puzzle. This summer, the MPS team used MDI data to infer the large-scale components of motion in the north south direction. "Without the data from SOHO, in combination with other datasets, this work would not have been possible," he adds.

The question which processes on the Sun are responsible for changes in its radiation output could also only be answered with the help of SOHO’s data archive. According to an analysis by MPS researchers, fluctuations in brightness on time scales ranging from days to several years are primarily due to magnetic structures on the solar surface. These manifest themselves as bright and dark areas on the Sun; their abundance also fluctuates in a cycle of about eleven years. "In order to prove this correlation, we needed information about the magnetic fields on the solar surface and about the radiation intensity of the Sun from the same, very long period of time”, explains Dr. Natalie Krivova from MPS. Again, SOHO’s data archive proved to be the key to success.

In recent years, SOHO has received increasing support: Numerous younger space probes such as SDO, IBEX and IRIS are now also looking at our star, each with its own special assets. The latest addition to the family of solar probes is ESA’s Solar Orbiter. The spacecraft was launched early this year and in the coming years will for the first time investigate the Sun’s poles from close range. "Solar Orbiter will no doubt add important pieces to the still incomplete solar puzzle," said Gizon. "The basic pieces of this puzzle, however, we owe to SOHO."