When you get a cup of hot coffee and a glass of cold beer, what should you drink first? Does the coffee get cooler faster than the beer warms up? Based on our everyday experience, one would expect that the answer depends only on how much the temperature of the two drinks differs from their ambient temperature. If the difference is the same, both processes should occur at the same rate. This does not apply on the nanoscale though: Small systems warm up faster than they cool down. The Göttingen Max Planck researchers Aljaz Godec and Allesio Lapolla have now mathematically proven this. 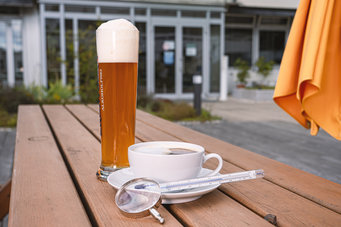 When thermodynamic equilibrium is restored after a rapid change in temperature – in this example, the temperature of beer or coffee – the so-called free energy is the driving force. It is composed of two driving forces that work against each other: entropy and potential energy.

“When we tap a cold beer, its ambient temperature changes because it is much cooler in the barrel,” explains Lapolla, a PhD student in Godec's research group at the Max Planck Institute (MPI) for Biophysical Chemistry. “The cold beer then warms up to the ambient temperature, the predominant driving force being the entropy of the beer. Entropy dictates the direction in which processes in nature evolve spontaneously. Heat, that is the kinetic energy of particles, can only flow from warm to cold, in this example from the warmer environment to the colder beverage. Entropy, therefore, facilitates the warming of our beer.”

Relaxation happens faster 'uphill' than 'downhill'
The researchers now, for the first time, proved mathematically that entropy during warming is much more efficient than potential energy during cooling. “We have shown that the counterplay of potential energy and entropy in the system, which warms up, is less of an obstacle on return to thermodynamic equilibrium. Therefore, given that the difference in free energy to thermodynamic equilibrium is in two systems the same, a sufficiently small system warms up faster than it cools down – even if this seems very counterintuitive to us. If you get a beer and coffee that are small enough, reach for the beer glass first,” says the physicist with a wink.

In the future, the scientists' findings could prove useful in improving tiny thermal engines or synthetic nanomachines.