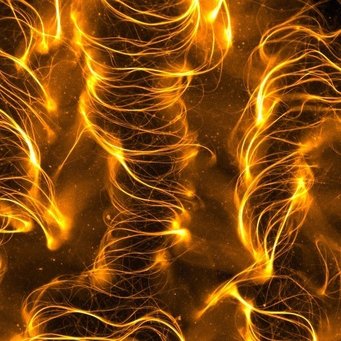 Nematic materials, such as the liquid crystals in our displays, contain molecules that align themselves in parallel. When they are constructed from microtubules and kinesins, materials found in our cells, they become active and move and deform without the supply of energy from the outside. In a new paper published in Nano Letters, researchers at the Max Planck Institute for Dynamics and Self-Organization in Göttingen report the creation of a 3D active nematic. The material passes through several spatial patterns, from collapsing into a ribbon to wrinkling in 3D.

Nematic materials are made of rod-like molecules and combine some features of liquids with others that resemble solid crystals. They flow like a liquid and their components are disordered in space, but they are able to self-orient such that the neighbouring molecules are aligned in parallel. Imagine throwing a bunch of crayons in a box and shaking it. After a while the crayons will position themselves parallel to each other and display what we call a nematic order. Nematic liquid crystals are widely used in the displays of our laptop computers, smartphones and numerous other devices, where the nematically ordered molecules and be re-oriented by applying an electric field, thus turning a pixel bright or dark. About a decade ago, active nematics were discovered. They are called active because the material does not need an external energy source to reorient, but rather carries its internal energy source and is capable of using it to drive motion from the inside. The materials that form an active nematic come from biological cells. In the cell, microtubules and kinesin motors are essential components of the cytoskeleton, a loose network that surrounds the nucleus and gives the cell both mechanical stiffness and tracks to transport materials. Kinesins convert chemical energy, gained from the hydrolysis of adenosine-tri-phosphate (ATP), to mechanical work as they “walk” along microtubules to transport vital molecules inside the cell, contribute to cell organization and division. Outside the cell, microtubules and motor proteins can assume a different behaviour: while the microtubules get nematically aligned, kinesins fueled by ATP put them under stress. A new class of soft materials were born, the active nematics. They represent a fascinating model system that help us to understand the self-organizing processes in the cell and provide an ideal structure for testing and advancing the theories of active matter. In the past, active nematics were studied in two-dimensional layers, for example between water and an oil droplet. With sufficient activity, motor proteins are able to destroy the order of the aligned microtubules, leading to spontaneous pattern formation and a state called active turbulence, a perpetually agitated chaotic state.

Writing in the latest issue of Nano Letters, Isabella Guido and colleagues from the Max Planck Institute for Dynamics and Self-Organization report how they overcame the limitation of confinement and produced a three-dimensional active nematic. “Leaving the familiar two-dimensional flat geometry was not easy. You inevitably dilute the system, and then need to find the right chemical environment that will still allow it to produce the active forces you want”, says Isabella Guido who leads the experimental research team in the Department of Fluid Physics, Pattern Formation and Biocomplexity, and adds “It is the sequence of events, where an inconspicuous bulk material suddenly collapsed to a flat sheet, but then started producing 3D patterns we’ve never seen before, that amazed us”. Indeed, the system keeps evolving in time and space rather than staying three dimensional, i.e., filling the volume of the experimental chamber, it initially collapses to a flat ribbon. In the ribbon, the molecular motors cause an extensile stress, which lead to a wrinkling instability. After that, the wrinkles grow until the folded ribbon explodes filling back the whole volume again with turbulent filaments that spontaneously form growing loops, constantly disintegrating and forming elsewhere. “These observations provide a remarkable manifestation of how non-equilibrium activity combined with the elaborate dynamics of soft matter systems can lead to new routes to self-organization” explained Ramin Golestanian, director of the Department of Living Matter Physics. The collaborating theoretical partners provided a theoretical explanation for the observed behaviour and carried out computer simulations how the system transitions through the described stages. Andrej Vilfan says “In the experiment we see the microtubules, but the nature of the forces between them is difficult to understand. Combining experiments with computer simulations gave us a new level of insight. Indeed, we show that most motors work against each other and it is only a tiny imbalance between those pulling in opposite directions that causes all the phenomena we see.”

The results will bring new understanding into the organization and force generation in biological cells. “Our goal is to create analogs of natural systems through a bottom-up approach using synthetic and biological building blocks. If we can finally find out how to control movement in such man-made active systems, we have the potential to develop biomimetic devices that can be used as actuators in future biotechnological applications.” Says Eberhard Bodenschatz, director of the Department of Fluid Physics, Pattern Formation and Biocomplexity. “We are now beginning to move away from the simple flow experimental chamber and start to shape the novel material into forms where completely new phenomena could be observed. We will unwrap our active ribbon and for sure will find a box full of stunning discoveries that will amaze our curiosity.” concludes Isabella Guido.