Starspot regions occurring preferentially in large clusters could be the cause of the strong brightness fluctuations of solar-like stars. 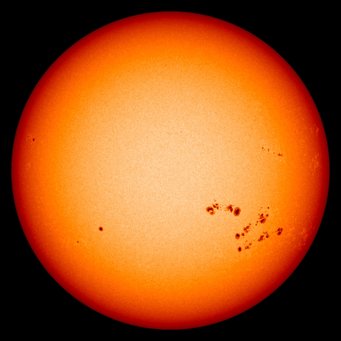 In cosmic comparison, the Sun is a bore. While the brightness of some other stars with similar characteristics fluctuates strongly, the Sun’s variations are much more moderate. Scientists from the Max Planck Institute for Solar System Research (MPS) in Germany, from the Turkish-German University and Boğaziçi University in Turkey, and from Kyung Hee University in South Korea, have now investigated how exactly sun- and starspots affect this behavior. In addition to the number and size of the spots, their distribution plays a crucial role. If groups of sunspots were to appear more frequently clumped together in so-called nests, the Sun’s brightness variations could well keep up with those of its cosmic peers. The team reports on its results in today's issue of the Astrophysical Journal Letters.

Sunspots, dark areas on our star’s visible surface, are among its most striking features. They can assume such enormous proportions that they are visible from Earth without magnification, and usually persist for several days before decaying. During this time, they rotate together with the solar surface out of view. In this way, they contribute to solar brightness fluctuations occurring on time scales of several weeks.

Such fluctuations are also known from distant stars. However, in April of this year, a study by MPS scientists showed that the brightness fluctuations of some stars that resemble the Sun in important properties are much more pronounced than those of our star. The researchers had compared the light curves of more than 350 solar-like stars with those of the Sun. "We asked ourselves what distinguishes the spots of these stars from sunspots. Are there fundamental physical differences? Or are perhaps small alterations enough to explain the discrepancies," Dr. Emre Işık, first author of the new study, explains the basic idea.

Unlike the Sun, stellar surfaces cannot be observed directly. They are too far away. Instead, the researchers turned to their computers - and generated a kind of “experimental star”. This star corresponds to the Sun and other solar-like stars in many respects, but the size, number, and distribution of so-called active regions on the surface can be modified in the simulation. Active regions are areas of particularly high magnetic field strength, often associated with starspots.

"As it turns out, it doesn't take much to rev up a solar-like star," Dr. Alexander Shapiro, who heads the MPS research group “Connecting Solar and Stellar Variabilities”, summarizes the results. “And the idea of how this could work comes from the Sun itself”, he adds. The brightness fluctuations of the star in the computer simulations increased particularly sharply when active regions appeared a bit more frequently than typical of the Sun, but especially preferably in close proximity to each other. "Sunspots commonly appear in groups and nearly half of these groups clump together to form nests," Işık explains the motivation for these alterations. "First, a single sunspot group appears, others follow in its vicinity," he adds. As the current calculations now show, significantly higher fluctuations in brightness can be achieved, if the tendency to form nests is more pronounced.

In addition, the researchers were able to explain another strange behavior of several solar-like stars. While the brightness fluctuations of some solar-like stars are extremely regular, those of the Sun look rather messy. Here, the locations at which the groups of starspots emerge could play a role. When the starspots appear preferably at two opposite longitudes, this leads to very regular brightness fluctuations.

Whether the starspots of distant stars actually show such extreme nesting and frequently occur at certain longitudes, is difficult to verify. This requires further observations. "However, our calculations show, that the Sun may not be quite the cosmic oddball we thought at first”, says MPS director Prof. Dr. Sami K. Solanki. “Possibly it differs from most of its peers only in small details.”