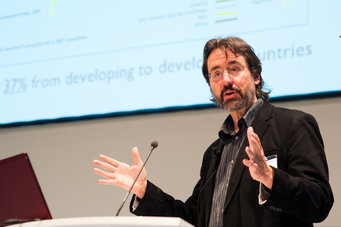 In the pandemic, populists and campaigners are currently stirring up prejudice against migrants and blaming them for the spread of the virus. The freedom of movement of refugees or certain ethnic groups is being restricted more drastically than that of the native population in order to prevent further spread of the disease - as it is officially called - but this also stigmatises those affected. Steven Vertovec, Director at the Max Planck Institute for the Study of Religious and Ethnic Diversity, considers this a dangerous development and calls for countermeasures.

It is becoming rapidly clear that Covid-19 exacerbates xenophobia and racism worldwide. Such fear and hatred of others, as presumed carriers of disease, is sometimes concentrated on specific groups such as Asians. Often, however, such fear and hatred is being directed at broad categories such as refugees and migrants. Such xenophobic sentiments related to Covid-19 are evident in Trump’s assertions about migrants spreading infection in the USA, in Orban’s linkage of coronavirus with “illegal migrants” in Hungary, in Salvini’s accusations against African migrants in Italy, and in broad patterns of hostility to foreigners in countries throughout Africa.

These kinds of views have played into the purposeful containment of migrants and refugees occurring right now in places as far flung as the US-Mexican border, Greece, Lebanon, Bosnia and Singapore. Health experts decry such measures as recipes for disaster while legal specialists declare them as abuses of human rights. Policymakers may insist that confining migrants is in the interest of public health. While arguable if not specious, such measures certainly play well to a segment of each national population who are wary of foreigners, especially the undocumented, asylum-seeking or low-skilled. If Covid-19 devastates such contained populations, it would amount to a kind of self-fulfilling prophecy whereby migrants and refugees are seemingly ‘proven’ to be public health risks.

Stigma acts as a cause of health inequalities
In these ways, Covid-19 potentially transforms pandemic prejudices and ‘blame game’ dynamics into stigma. Stigma entails labelling an entire group or category of people, and purporting them to have undesirable traits and behaviors such as laziness, immorality or lack of hygiene. Stigma results in low status, bias and discrimination affecting social relations, public images and institutional structures. Stigma subsequently acts as a cause of health inequalities as well as a magnifier of them.

Current treatments of migrants and refugees threaten to create a stigma of disease-carrying that may endure long after the Covid-19 crisis subsides. Stigmatic suspicions of migrants and refugees as potential disease-carriers might encourage new modes of ethnic profiling in regimes at borders (where new biometric measures would sort the presumed healthy from the health-risky), in practices of institutional discrimination, in patterns of geographical segregation and in everyday social interactions.

Stigma is hard to undo. This will particularly be the case in a post-Covid-19 world, where a great many people will have suffered directly through illness, loss of loved ones, unemployment and business ruin, financial hardship and family tension through lockdown. Dread and blame are expected reactions. This could easily lead to further discrimination and injustice, if not hostility and potential violence, focused on stigmatized categories of people such as migrants and refugees.

Shifts need to be supported by governments
What is needed, now, are steps toward pre-emptive destigmatization. This entails a number of moves to shift public representations as well as policies. Such shifts need to be seen to be supported, if not initiated, by governments and high profile individuals. Such destigmatization occurred, for instance, in the 1980s and ‘90s when public statements and campaigns helped remove the stigma surrounding people living with HIV/AIDS. This was largely done by demonstrating that people living with HIV/AIDS were just like the rest of society’s members, not some depraved underground population.

Such shifts in public representations of migrants and refugees, especially concerning Covid-19, should not solely be exercises in refuting or myth-busting stereotypes about characteristics wrongly presumed to be inherent to racial biology, culture or group behaviour. An important first step is to promote the understanding that migrants and refugees are categories that comprise a large and wide variety, or "super-diversity", of legal statuses, migration channels, nationalities and ethnicities, gender and age profiles, and more. Remarkably, this basic fact – that migrants and refugees are of many kinds and experiences – often needs public reiteration.

Migrants deserve empathy
Destigmatization should also entail removing blame through elucidating structural and socio-economic conditions and vulnerabilities faced by many migrants and refugees, just as the UN Development Programme (UNDP) and the International Labour Organization (ILO) are doing with regard to Covid-19 and people subject to poverty worldwide. An understanding should emerge that ‘they’, various people on the move, are not so different from ‘us’, the variously settled.

Migrants and refugees are often people subjected to appalling circumstances. Consequently, it should be more widely recognized that rather than posing risks to all, many migrants and refugees indeed tend to be more at risk, due to the conditions they often face, than many others in the global population. People within these categories deserve more understanding, empathy, compassion and care – certainly not enduring stigma.

This article was first published in German on 24 April 2020 in the German newspaper taz.