On Good Friday the Mercury probe BepiColombo will fly past Earth. Scientific instruments on board with MPS participation will use the opportunity to record their first scientific data 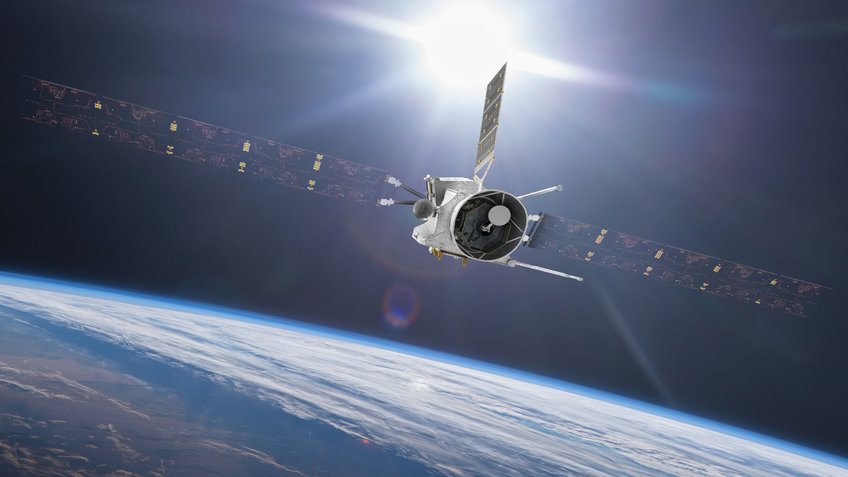 At closest approach, BepiColombo will be only 12,700 kilometres from Earth. ESA/ATG medialab

On its seven-year journey to Mercury, the planet closest to the Sun, the European-Japanese space probe BepiColombo will reach an important milestone on Good Friday, 10 April. By flying close to Earth, it will change its trajectory and progress deeper into the centre of the solar system. During the manoeuvre, some of the 16 scientific instruments will be switched on, including two to which the Max Planck Institute for Solar System Research (MPS) in Germany has contributed. While ESA's Space Operations Centre in Darmstadt will carry out the flyby with a reduced crew due to the current corona crisis, the MPS scientists will follow the events from their home office.

On 10 April at 6.25 a.m (CEST), only 12,700 kilometres will separate BepiColombo from Earth. The aim of the cosmic encounter is to slow down the Mercury probe and to bend its trajectory in such a way that it moves into closer orbits around the Sun. After eight further fly-bys of this kind, two of them at Venus and then six at Mercury itself, BepiColombo will reach the desired orbit around its target planet at the end of 2025.

For the scientists involved, the forthcoming flyby offers an important opportunity to test their instruments under realistic conditions. After the launch in October 2018, the 16 scientific instruments were gradually commissioned and tested. "However, measurements in interplanetary space only partially offer conditions comparable to those that will later prevail at Mercury," explains Dr. Norbert Krupp from MPS, who is part of the teams of the instruments MPPE (Mercury Plasma Particle Experiment) and SERENA (Search for Exospheric Refilling and Emitting Natural Abundances Experiment). "Real" scientific data will now be available for the first time during the Earth flyby. The manoeuvre will begin on the evening of Thursday, 9 April, and will be completed in the early morning of Saturday, 11 April.

In order to minimise the risk of infection for its staff in the current corona crisis and to maintain the needed minimum distance between people, ESA will be operating the flyby from ESOC (European Space Operations Centre) in Darmstadt with a smaller team than usual. Scientists from the individual instrument teams, who are usually present during such manoeuvres, will not be travelling to the control centre this time. "To witness the flyby on site in Darmstadt would have been a special experience", says Dr. Markus Fränz from MPS, also a team member of SERENA and MPPE. "But in the current exceptional situation we can, of course, handle this differently.” The commands for the respective scientific instruments have already been programmed; changes during the flight are not planned.

MPS researchers contribute to four of the 16 instruments, although not all of them will be operating during flyby. The reason for this is the configuration during the seven-year approach to Mercury. BepiColombo consists of two autonomous probes, the European Mercury Planetary Orbiter (MPO) and the Japanese Mercury Magnetospheric Orbiter (MMO, also known as Mio), which currently travel piggybacked and stacked on top of each other on the so-called transfer module. The upper MMO probe is, in addition, surrounded by a sun shield. Once they arrive at Mercury, both probes will separate from the transfer module and from each other and then orbit the planet on their own trajectories.

Currently, however, the view of some instruments is obstructed or at least restricted. The instruments MIXS (Mercury Imaging X-Ray Spectrometer) and BELA (BepiColombo Laser-Altimeter), which MPS helped to develop, are located on the underside of MPO. In the current configuration, this side is connected to the transfer module so that both instruments cannot perform measurements. The instruments MPPE and SERENA are in a more favourable situation. MPPE, for which MPS has developed the mass spectrometer MSA (Mass Spectrum Analyzer), is part of the scientific payload of the Japanese probe MMO and is thus, so to speak, enthroned at the very top of the spacecraft stack consisting of transfer module, MPO, and MMO. However, the sun shield restricts its view. The ion camera PICAM (Planetary Ion Camera) of the SERENA experiment enjoys an unobstructed all-round view from the top of the MPO.

Both instruments will be used at Mercury to study the charged, high-energy particles trapped in the planet's magnetic field. Besides Earth, Mercury is the only Earth-like planet with a magnetic field. However, it is 130 to 340 times weaker than Earth's magnetic field. Another special feature: During strong solar activity, Mercury’s magnetosphere is temporarily compressed so strongly that large parts of the planet's surface are directly exposed to the solar wind. This bombardment causes oxygen, sodium, magnesium, and calcium ions to be released from the surface and enter the planet's magnetosphere.

"The upcoming Earth flyby offers our instruments completely different conditions than the operation at Mercury", says SERENA and MPPE team member Dr. Harald Krüger from MPS. For example, the charged particles in the radiation belt, the torus of high-energy particles around the Earth, are much more energetic and concentrated than is to be expected at Mercury. SERENA and MPPE are partly not designed for these extreme "working conditions". In order not to damage the instruments when flying through the radiation belt, they are therefore switched off during this phase.

During the other phases of the flyby, however, they will be operating. Since the properties of Earth's magnetosphere have already been well studied by other research satellites, the measurement data offer the possibility of calibrating the instruments under space conditions before arriving at Mercury. The next fly-by, then at Venus, is scheduled for October this year.