Every year, top researchers apply for funds from the European Research Council (ERC), and the highly endowed ERC Advanced Grants are sought after in particular. Göttingen Max Planck Director Patrick Cramer has now been successful for the third time – an exceptional achievement. The biochemist investigates how cells use the information stored in their genome. His work on the regulation of this fundamental process is now funded with about two million euros. 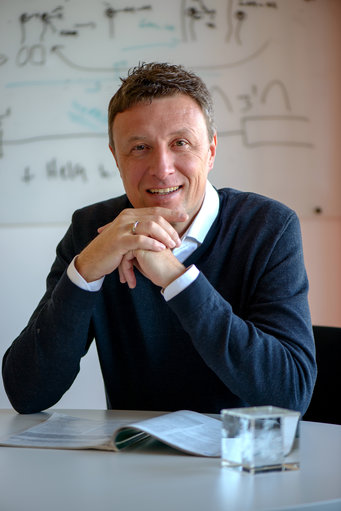 How does a fertilized egg cell become a living being? How are nerve, muscle, or skin cells formed? “Our genes show different states of activity in different cells,” states Cramer, who heads the Department of Molecular Biology at the Max Planck Institute (MPI) for Biophysical Chemistry. Depending on their needs, cells selectively activate genes to retrieve the stored information. Only the DNA of active genes is copied in the form of long RNA molecules which then serve as building instructions for proteins. This process – known as transcription – is carried out by cellular copying machines, so-called RNA polymerases, which are only about 15 millionths of a millimeter in size.

Cramer’s team has already succeeded in deciphering the three-dimensional structure of several RNA polymerases and thus gained important insights into their function. “In our previous work, we have investigated how RNA polymerases use DNA as a blueprint to produce RNA,” the Max Planck researcher says. “In doing so, we have found out how the copying machine recognizes the starting point of the genes and how it glides along the DNA to elongate the RNA chain.” The department was also able to show how the process is regulated at the very beginning, even before long RNA molecules are formed.

However, the situation in living cells is more complicated: The DNA is not ’naked’ but with several proteins forms a complex called chromatin. The interaction between chromatin and the transcription machinery is much less understood, Cramer explains. Together with his co-workers, the scientist hopes to clarify how the chromatin is opened locally and how the copying machine gains access to the DNA. This process plays a central role in the development of organisms and in the generation of different cell types. In addition, this chromatin regulation is important in stem cells and in the development of cancer.

“The third ERC Advanced Grant is a great success for our entire team because it honors not only our plans but also what we have achieved over the last few years,” Cramer emphasizes. “We now want to use the grant to learn more about mechanisms of transcription in the chromatin context”.