In a recently published study, researchers from the Max Planck Institute for Dynamics and Self-Organization show how the slime mold Physarum polycephalum can increase its pump efficiency when exposed to harmful light. 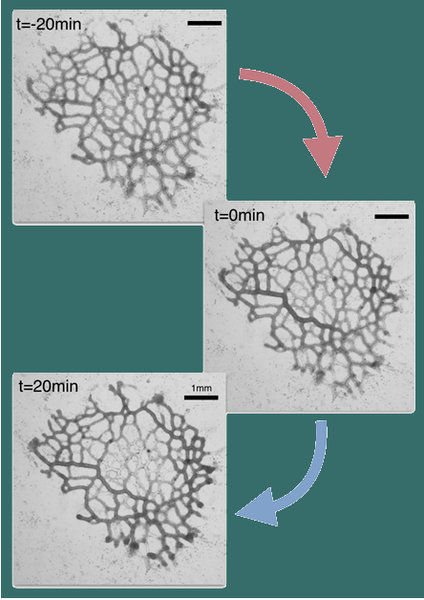 When harmful light hits the center of the slime mold network, the slime mold shifts the fundamental and overtone of the pump waves, thus increasing pump efficiency.

In a recently published study, researchers from the Max Planck Institute for Dynamics and Self-Organization show how the slime mold Physarum polycephalum can increase its pump efficiency when exposed to harmful light. It exploits the fact that its undulating pumping motion has overtones that can pump more efficiently in a particular constellation. Like in an instrument, these waves have a fundamental frequency (fundamental) and at least one overtone.

The slime mold Physarum polycephalum can thus add another achievement to its long list of remarkable properties. For example, it is already known to find the shortest way through a maze or to follow a balanced diet, without having a central nervous system. Now MPIDS researchers Karen Alim, Felix Bäuerle and Stefan Karpitschka are showing in experiments that it can also spontaneously adjust its pumping efficiency as soon as its environmental conditions change. Thanks to the clever interaction of two superimposed pumping modes, he doesn't even need more energy, but can still achieve a considerable increase in performance.

Pumping waves in slime molds
Nutrients flow rhythmically back and forth through the tube-like body of the slime mold, whereby the tubes themselves also function as pumps by repeatedly contracting. The waves make use of peristalsis, i.e. the contraction and expansion of the tubes, an effect that is also known to us humans and occurs for example in the oesophagus or intestines. However, in the case of the slime mold, a clever superposition of two waves occurs: A fundamental wave and an overtone at twice the frequency. The researchers found that under blue light, from which the slime mold wants to escape, one of the waves shifts against the other until they have reached an optimum pumping efficiency. When the waves are in the optimum constellation, they work together to contract the tube even tighter, thereby achieving an increase in efficiency without having to put more energy into the waves themselves. "Of course, we immediately asked ourselves, why doesn't Physarum always pump at higher efficiency," says Karen Alim, head of the Biological Physics and Morphogenesis group at MPIDS. "To answer this question, we did a calculation of the tube’s dynamics and found that such a viscoelastic tube would already generate an overtone without external influence. However, this result is exactly opposite to the efficient solution shown by the slime mold". - Only a conscious intervention of the slime mold makes the observed dynamics possible, which suggests that Physarum has an excellent command of its pumping coordination," says Felix Bäuerle, first author of the study.

Slime mold and humans
In the future, the observations could be used in medical technology or in soft robotics where peristalsis is already used today. For the authors, however, it is especially an astonishing example in which nature is far ahead of mankind. Stefan Karpitschka says: "There is a lot of complexity in the small yellow forest critter Physarum polycephalum that needs to be mastered: a viscoelastic cell material, constantly changing environmental conditions and no brain to coordinate the whole thing. And yet, after only twenty minutes, it manages to escape a light spot perfectly by adjusting its pumping efficiency with a clever trick and does not even need more energy.”