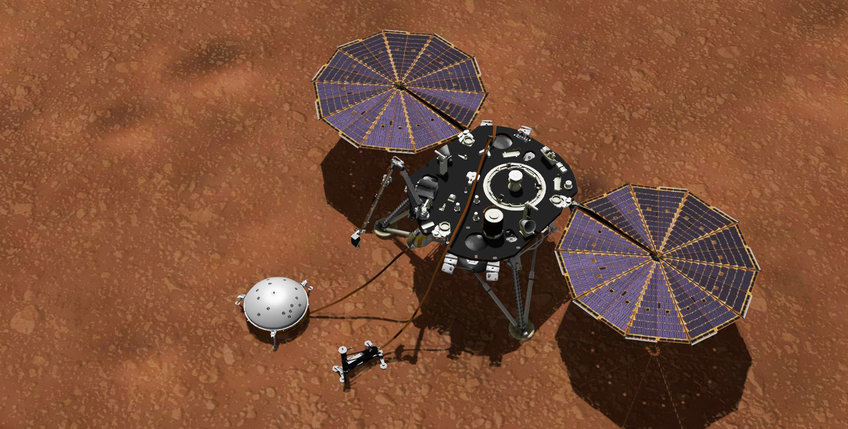 Space scout on the Red Planet: InSight - here an illustration of the probe on the surface - provides valuable insights into the inner workings of Mars. NASA / JPL-Caltech

In the first ten months since starting its scientific operations in February 2019, InSight’s seismometer SEIS has detected a total of 174 probable Martian quakes, on average a bit more than one quake every two days. The data published today by researchers including the Max Planck Institute for Solar System Research (MPS) in Germany provide the first comprehensive proof that Mars, like Earth and Moon, is seismically active. In terms of the quakes’ frequency and strength, however, the Red Planet lags far behind Earth. None of the quakes exceeded a magnitude of 4. On Earth, such quakes are hardly perceptible without instruments. However, even the weak Mars quakes allow first inferences about the planet’s structure. InSight is a NASA mission designed to probe the interior of Mars.

InSight is the first mission to carry out meaningful seismic measurements on Mars. Viking 1 and 2, which in 1976 were the first landing probes to successfully touch-down on Mars, already carried seismometers on board. However, these were firmly attached to the lander and − as it turned out later − only recorded how the Martian wind shook the landing probes. Since 26 November 2018, Mars once again has a seismologically interested guest and this time the measurement campaign, which is scheduled to last two years, is going much better. InSight’s seismometer SEIS was set down on the Martian soil with the help of a robotic arm; it remains connected to the lander by cables. A wind and temperature shield placed over the seismometer reduces environmental influences. SEIS, which was developed and built by a team of scientists and engineers including MPS, started its scientific operations at the end of February 2019.

Since then, SEIS has measured quakes at least every second Martian night on average. "During the day, the winds on Mars freshen up. Although SEIS is very sensitive and is protected from direct wind, very weak quakes can hardly be detected then", Dr. John-Robert Scholz from MPS, member of the Marsquake Service, explains. In total, the team was able to detect 174 probable quakes in the measurement data recorded by 30 September 2019. For 150 of them, only waves that propagate in the uppermost rocky layer of Mars, the crust, could be discerned. Such quakes are also known to occur on Earth. They cannot provide information about the deep structure of the planet.

Scientists assume that Mars − similar to Earth − has an onion-like structure. The core in the center is followed by a rocky mantle and a crust on the outside. "There are many theories and models that describe the thickness and composition of these layers," explains SEIS Co-Investigator Prof. Dr. Ulrich Christensen from MPS. "But only seismological measurements on site can provide certainty."

An indirect view into the interior
An earthquake typically produces waves that propagate along the surface of the planet as well as pressure and shear waves that pass through its interior. They travel through the layers at different speeds and are refracted and reflected at their boundaries. When and where the waves reach the surface therefore allows conclusions about the planet’s inner structure. The analysis of Martian quakes should also provide such information.

24 of the measured quakes passed through the rocky mantle of Mars and show similar characteristics to earthquakes: the seismogram first displays pressure waves followed by shear waves. Compared to earthquakes, the signals decay more slowly. This could indicate that the waves are more strongly scattered in the Martian crust. The typical surface waves are missing. One reason could be that the origins of the quakes lie very deep within the planet.

Overall, all registered quakes were weak. None of them exceeded magnitude 4. On Earth, quakes of this magnitude occur more than a thousand times a year and can hardly be perceived without technical instruments. "We had expected Mars to be less active than Earth," says Christensen. Unlike Earth, Mars probably consists of only one continuous tectonic plate. On Earth, on the other hand, tensions that build up between adjacent plates and are then released generate most of the strong quakes.

"On Mars, the cooling of the planet may be one of the reasons for quakes," Christensen says. Quakes that originate within one plate are also known to occur on Earth. These quakes are typically rather weak. If one extrapolates the Martian quakes that InSight was able to measure at its location to the entire planet, the frequency of such intraplate quakes is only slightly lower than on Earth.

Only seismometer on Mars
It is extremely difficult to interpret the measurement data from Mars − not only because the signals from the quakes are weak and easily lost in noise, but also because SEIS is the only working seismometer on Mars. "On Earth, seismometers at different locations work in a network," explains Scholz. This makes it possible to reliably determine the path taken by the earthquake waves; the strength and epicenter of the quake can be calculated with a high degree of accuracy. Deriving such information from the data of just one instrument requires completely different methods and approaches. "It is exciting to see how a science that has long been established on Earth has to completely reinvent itself under 'Mars conditions'," Scholz adds.

So far, the position of the epicenter could be determined for only three quakes. For ten others at least the distance between the epicenter and the InSight lander can be inferred. The three secured epicenters are located in the Cerberus Fossae region, a volcanically formed, comparatively young plain with many trenches and fractures. It is located about 1600 kilometers from the InSight landing site in Elysium Planitia. Some of the quakes that have proven more difficult to locate could also have their origin there.

To better understand the properties of the Martian crust, the SEIS team also looked at signals recorded by SEIS while InSight’s Heat Flow an Physical Properties Package (HP3) tried to hammer itself into the ground. The instrument, often referred to as the mole, was designed to drive its temperature sensors up to five meters deep into the Martian soil and determine heat flow and conductivity. Although this goal has not yet been achieved, the blows of the hammer themselves are useful. After all, the exact time of their occurrence is known.

Analysis of this data and of some of the quakes show that the upper 8 to 11 kilometers of the crust are strongly fractured. In addition, the measurements suggest that smaller amounts of fluids, such as possibly saline solutions, can be found there.

To probe the deeper interior of Mars, the researchers hope for a stronger quake in the coming months. On Earth, violent tremors occasionally occur even within a tectonic plate. The waves triggered in this way penetrate deeper into the planet – and with a little luck even reach the core.