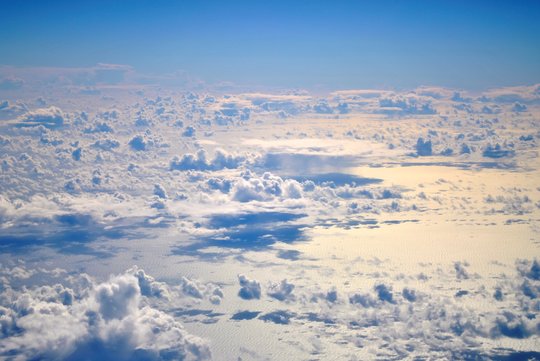 Nebulous climate factor: one of the EUREC4A field study’s objectives is to determine whether flat cumulus clouds will continue to form such an effective natural parasol over the tropics as they currently do, even in the face of progressive global warming. Bjorn Stevens

When it comes to predicting the extent of global warming by the end of the century, clouds are one of the greatest uncertainty factors. Cumulus clouds in lower layers of the atmosphere, reflect sunlight, thereby cooling the surface of the Earth. An international team will be starting the almost six-week-long EUREC4A (Elucidating the role of clouds-circulation coupling in climate) field study on the 20th of January 2020 to gain a better understanding of how changes in cloud cover occur as a result of climate change. Due to the particularly high number of flat cumulus clouds in the tropics, which have a strong influence on climate, the field study will be carried out near Barbados in the Caribbean. The survey will involve the use of several research aircraft and ships in addition to satellites, a monitoring station on Barbados, a mobile weather radar, balloon kites (“Max Planck CloudKites”) and autonomous flying vehicles.

Many of our current forecasts do not bode well. In particular, complex climate models predict that global warming will result in the formation of fewer clouds in the future, especially in the Tropics, which are currently still covered by broad bands of clouds. The dark land and oceanic surfaces would then absorb more sunlight and heat up even more, which would further accelerate climate change. Less complex models produce opposite results. Building upon decades of collaboration with scientists from the Caribbean Institute for Meteorology and Hydrology in Barbados, the EUREC4A project was initiated by more than 40 research facilities as part of a French-German initiative to determine whether this positive feedback actually occurs and how strong it may be.

"We will be checking whether the predictions of the models that show a strong decrease in cloud in conjunction with warming are correct", says Bjorn Stevens, Director at the Max Planck Institute for Meteorology in Hamburg and one of the initiators of the collaboration. "If so, it would indicate that the higher estimates of the expected warming from increasing CO2 levels are more plausible". Much uncertainty about how clouds react to climate change still remains. "We want to change this with the EUREC4A initiative".

Contribution to the general understanding of tropical clouds
Researchers involved in the collaboration will now collect measurement data, which will enable them to verify the forecasts made by the models. Because cloud formation is influenced by numerous factors, such as vertical air mixing, turbulence at the Earth's surface and large-scale circulation patterns, i.e., the global circulation of air flows, the measurement data will be extensive. "The low clouds near Barbados are representative of the clouds found in the trade wind routes throughout the Tropics", says Sandrine Bony, a scientist at the Laboratoire de Météorologie Dynamique in Paris and head of the collaboration. "So, anything we learn from EUREC4A will not only increase our understanding of the clouds off Barbados, but also of tropical clouds in general".

However, any meaningful picture of the conditions and processes under which clouds form can only be formed based on data covering a relatively large area. This is why the EUREC4A collaboration has draughted in five research aircraft, which will fly at various altitudes over different areas east of Barbados, each with a diameter of around 200 kilometres. Three of the aircrafts, including the HALO research plane managed by the German Aerospace Center, in which the Max Planck Institutes for Meteorology and Chemistry are also involved, will be stationed in Barbados specifically for the field study.

In addition, four ocean-going research ships, including the German research vessels Meteor and Maria S. Merian, will traverse the study area. On board will be researchers from the Max Planck Institute for Marine Microbiology in Bremen and the Max Planck Institute for Dynamics and Self-Organization in Göttingen, among others. Among other things, the Bremen-based Max Planck scientists will be investigating the role played by marine organisms in the carbon balance. Two Max Planck teams from Göttingen will be launching Max Planck CloudKites (balloon kites) into the atmosphere up to an altitude of two kilometres. The balloon kites were developed by a team led by Eberhard Bodenschatz, Director at the Max Planck Institute for Dynamics and Self-Organization, to investigate microphysics and the role played by turbulent flows in the formation of cloud droplets.

A comprehensive picture from a large volume of data
The Barbados Cloud Observatory (BCO), which is operated by the Max Planck Institute for Meteorology, will serve as a kind of base station for the EUREC4A field study. Its measurements will be augmented by remote sensing data from earth observation satellites as well as observations from the flexibly controllable POLDIRAD (Polarization Diversity Doppler Radar) weather radar, which was developed with funding from the Max Planck Society's Supporting Members and will also be deployed in Barbados throughout the survey period.

The researchers not only plan to use the data to check climate model forecasts, but also to help narrow the broad range of predictions about how strongly the climate will react to the ever-increasing volume of greenhouse gases in the atmosphere. "Estimates of climate sensitivity still include a high level of uncertainty, mostly concerning the reaction of low level clouds in the tropics, especially in the trade wind areas", says Sandrine Bony. However, because of the large volume of data the EUREC4A measurements will generate, it will take a few years for researchers to assemble the many pieces of the puzzle to form a comprehensive picture. They may then also be in a position to answer the questions as to whether the cooling tropical cloud cover will become porous as a result of climate change, and if so, how much this will contribute to global warming.