Measurements from the last phases of the Cassini mission show how dynamic processes in the Saturnian system shape the moons Pan, Daphnis, Atlas, Pandora, and Epimetheus. 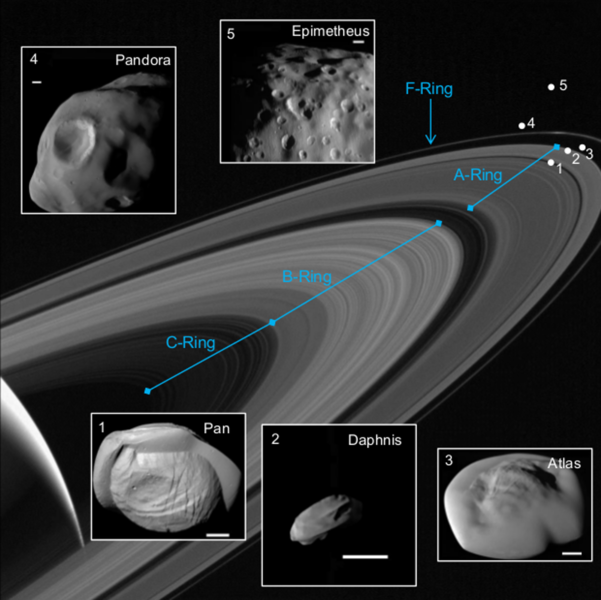 The five moons Pan, Daphnis, Atlas, Pandora, and Epimetheus are located in the outer part of the A-ring, which is clearly visible from Earth, and near the F-ring. The moons Pan, Daphnis, and Atlas are reminiscent of ravioli with their ring-like bulge along the equator. The scale indicated in each image is five kilometres. © NASA/JPL-Caltech/Space Science Institute

Most of Saturn's 62 moons orbit their giant planet at a great distance outside the main rings. Only slightly more than a handful of small, irregularly shaped bodies, so-called ring moons, are an exception. In the final months of NASA's Cassini mission, the space probe was able to take the most accurate look yet at five of these bizarre, partly ravioli-shaped bodies and the space environment to which they are exposed. The results of these measurements are presented an article published this week in the journal Science by a team of researchers including the Max Planck Institute for Solar System Research (MPS) in Germany. Shape, density, surface texture, and composition as well as the distribution of charged particles in the environment allow conclusions about the evolution of the ring moons. Monitoring of the moons’ charged particle environment yielded a surprise: a tightly confined accumulation of high energy electrons that forms a previously unknown micro-radiation belt in the region of the planet’s F ring.

Three of the innermost Saturnian moons, Pan, Daphnis, and Atlas, are bizarre worlds: With their ring-like bulge along the equator, they are reminiscent of cosmic ravioli. While Pan and Daphnis have cleared orbits for themselves within the A-ring, as is clearly visible even from Earth, Atlas is located at the outermost edge of this ring. Pandora and Epimetheus, both more potato- than ravioli-shaped, orbit Saturn outside the adjacent, much thinner and dustier F-ring.

The final phases of NASA's Cassini Saturn mission offered the opportunity to study these unique bodies, with diameters ranging between 8 and 120 kilometers, from close-up. In six flybys between December 2016 and April 2017, five cameras and spectrometers aboard Cassini were able to collect unprecedented data. A little later the particle detector LEMMS (Low Energy Magnetospheric Measurement System) developed and built by researchers under the leadership of the MPS as part of the MIMI (Magnetospheric Imaging Instrument) instrument package, contributed to the campaign: between April 2017 and September 2017, when Cassini flew its most daring manoeuvres and dived into the area between Saturn and its innermost ring. During those orbits, LEMMS performed the first detailed and systematic monitoring of the ring moons’ surrounding space environment.

This multi-instrument campaign provides the most accurate picture of the five ring moons to date. With spatial resolutions between 36 and 170 meters per pixel, the volume and thus density of the bodies could be determined much more accurately than before. More detailed insights into the nature of the ravioli-like bulges were also possible. While Pan’s bulge accounts for about ten percent of the moon’s total volume, Daphnis’ bulge makes up only one percent and Atlas’ bulge 25 percent of its total volume. In all three cases, the bulge is much smoother and has fewer craters than the rest of the surface, suggesting a younger age. This also applies to the rather flat equator region of the moon Pandora. All in all, the five moons appear to be very porous; with a maximum of 640 kilograms per cubic meter, their average densities are comparable to that of cork.

All this points to a multi-stage formation process in which loose material from Saturn's rings is gradually deposited at the equator of the ring moons. A denser core could be hidden beneath ? possibly a fragment of a larger body that once orbited Saturn and was destroyed by collisions.

The surface composition of the moons, which could be determined for the first time with the VIMS spectrometer (Visible and Infrared Mapping Spectrometer), also points to the deposition of ring material. The closer the moons are to Saturn, the redder they appear. This color also predominates in the ring material itself. Scientists suspect organic and iron-rich compounds there. The outer ring moons, especially Epimetheus, appear bluer. This is because it is coated with granules that Saturn's more distant moon Enceladus emits into space. "Both processes work together and thus demine the appearance of the ring moons," says MPS scientist Dr. Elias Roussos, one of the lead authors.

High energy particles can also alter the surface properties of the moons, but according to LEMMS data the influence of this plasma environment proved to be negligible. "Our measurements show that the environments of all five moons are largely free of high energy protons," says Roussos. Together with the F-ring, the moons Pandora and Prometheus absorb these protons so effectively that no significant amount can build up in their environment. The situation is similar for the moons orbiting within the A-ring.

While LEMMS found that the high energy electron environment was also benign, its data showed in addition something completely unexpected: a persistent pile-up of energetic electrons along the F-ring. These results are presented in an article published in the Journal Geophysical Research Letters.The pile-up does not spread along the entire ring: it is centered few hours after local noon time in the magnetosphere and extends over a spatial angle of about 15 degrees. The scientists refer to this distribution as a micro-radiation belt or microbelt. Its angular confinement is revealing of complex plasma flows near the planet, but its colocation with the F-ring is most surprising. "Rings are generally known to remove particle radiation. Contrary to that, the F-ring appears to generate its own, tiny radiation belt. How that happens is still a mystery," says Roussos.