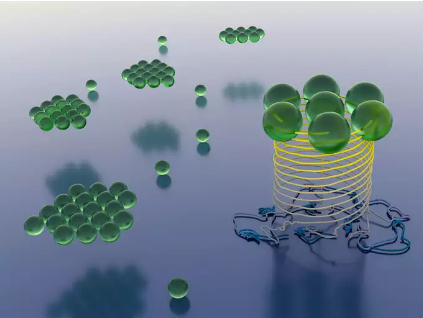 Bacteria and other unicellular organisms developed sophisticated ways to actively navigate their way, despite being comparably simple structures. To reveal these mechanisms, researchers from the Max Planck Institute for Dynamics and Self-Organization (MPI-DS) used oil droplets as a model for biological microswimmers. Corinna Maass, group leader at the MPI-DS and Associate Professor at the University of Twente, together with her colleagues, investigated the navigation strategies of microswimmers in several studies: how they navigate against the current in narrow channels, how they mutually affect their movement, and how they collectively start rotating in order to move.

In order to survive, biological organisms have to react to their environment. Whereas humans or animals possess a complex nervous system to sense their surroundings and to make conscious decisions, unicellular organisms developed different strategies. In biology, small organisms such as parasites and bacteria for example navigate through narrow channels such as blood vessels. They often do so in a regular, oscillating manner based on hydrodynamic interactions with the confining wall of the channel. “In our experiments, we could confirm the theoretical model that describes the specific dynamics of the microswimmer based on its size and the interactions with the channel wall” comments Corinna Maass, principal investigator of the studies. These regular movement patterns could also be used to develop mechanisms for targeted drug delivery, even transporting cargo against the current as also indicated in a previous study.

A trail of used fuel
In another study, the researchers investigated how moving microswimmers mutually affect each other. In their experimental model, small oil droplets in a soapy solution move autonomously by budding off little amounts of oil generating propulsion. Like a plane leaves behind contrails, the microswimmers generate a trace of used fuel which can repel others. This way, microswimmers are able to detect if another swimmer has been at the same place shortly before. “Interestingly, this causes a self-avoiding movement for individual microswimmers, whereas an ensemble of them results in droplets being caged between the trails of one another” reports Babak Vajdi Hokmabad, first author of the study. The repelling of the second droplet at the trajectory of a previously passing one depends on its approaching angle and the time passed after the first swimmer. These experimental findings also confirm the theoretical work in the field, previously conducted by Ramin Golestanian, managing director of the MPI-DS. The research was conducted in the scope of the Max Planck Center for Complex Fluid Dynamic, a joint research center composed of the MPI-DS, the MPI for Polymer Research and the University of Twente.

Collective movement through cooperation
Finally, the group also investigated the collective hydrodynamic behavior of multiple microswimmers. They found that multiple droplets can form clusters that spontaneously start to float like hovercrafts or rise and rotate like microscopic helicopters. The rotation of the cluster is based on cooperative coupling between the individual droplets which leads to coordinated behavior - although individual droplets alone do not comprise such movement. These arrangements represent thus another physical principle of how microswimmers are able to navigate their way – without using brains or muscles.